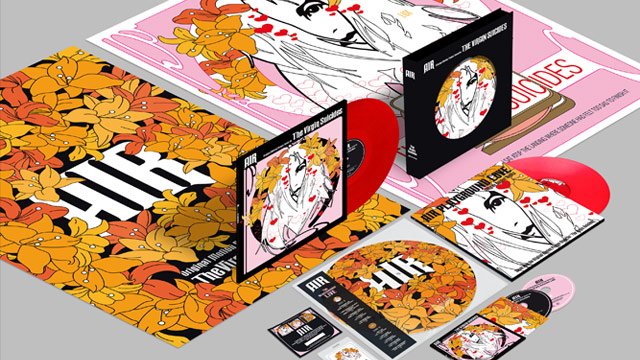 Sofia Coppola's 2000 dark comedy The Virgin Suicides ended up being that rarest of beasts: a movie with two distinct soundtrack albums. There was the mixtape-style version, with tracks from Sloan, Heart, Al Green and Styx, as well as a full-length soundtrack from the French duo Air. The story goes that Air was disappointed to find that most of their music had been cut from the film, so they released it as its own album, also under the name The Virgin Suicides. This was between the release of their five-star debut, Moon Safari, and its style-jumping follow-up, 10,000 Hz Legend. The band has issued a deluxe repackaging of their version of the soundtrack, and one Air fan and AllMusic reader is going to have one arrive at their doorstep.

And there are two ways to enter for your chance to win (choose only one):

1) Log in with your AllMusic account—or sign up if you aren't already a user—and comment on this post with the name of your favorite Air song. Be sure to register with an email address you check regularly, because that's how we'll notify you if you are selected.

2) Mail us a letter or postcard with the name of your favorite Air song, plus your contact info (email address, Twitter handle, or phone number) to AllMusic HQ, postmarked by Wednesday, July 8.

Or if you know you need this box set in your life regardless of our contest, you can order the 15th anniversary box set of Air's The Virgin Suicides via Amazon..

Rules:
• Giveaway begins Tuesday, June 30. Winners will be selected on Wednesday, July 15.
• Winner will be contacted via the contact info they provided, so be sure to register with a valid email address that you check regularly.
• If no response is received from winner within 72 hours, a new winner will be drawn from the pool of candidates.
• Must have a United States mailing address (due to taxes, customs regulations, and the complexity of international sweepstakes rules).
• Must be over 13 years of age to enter.
• One entry per household.

Are you a publicist or manager looking to do a giveaway through AllMusic? Drop us a line: nyyzhfvp_cerff@nyyzhfvp.pbz.