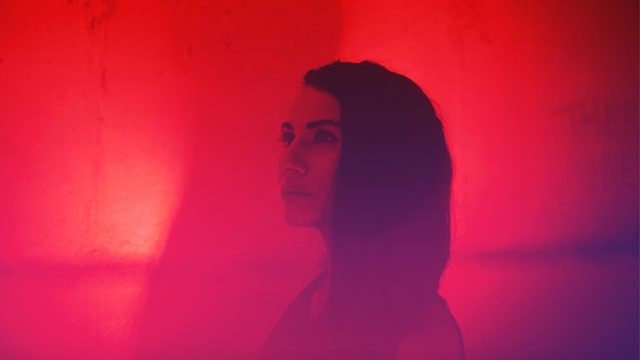 There was a moment when Frankie Rose was about to call it a wrap. She had released three solo albums, including 2013's excellent Herein Wild, but due to a confluence of circumstances, she found herself in Los Angeles, working a proper job and convinced that music was in the past. When she dragged herself out of the darkness -- facilitated by a relocation to Brooklyn -- she had made Cage Tropical, an album that steps away from her earlier noise pop and spaced-out sounds in favor of something more synth-based and frosty, reminiscent of goth pop from the 80s. The album earned four stars from editor Tim Sendra, who heaped praise on the record, suggesting "if it had come out in 1985 -- and it seems like it should have -- it would be one of the classic albums of the era."

Rose shared the story of her return to the musical world, how her new music colors what she's made in the past, and why you shouldn't try to make her dance.

AllMusic: Since the album was mostly written in Los Angeles, and then recorded once you'd relocated to New York, did the change in setting affect the way the songs were finished?

Frankie Rose: Not really. For me, it’s experiential, it’s what’s happening in my life at that time, if I had a bad breakup or my dog died or I got married or whatever. I really don’t think if I went to Joshua Tree or Alaska, it would affect me. Maybe it would, if I was too cold or too hot, but I feel like every record is a time capsule of what’s happening with me, how I’m feeling, the things that are happening with my life at that time, or right before. So this is very informed by L.A., what happened in L.A., and I finished it in New York City, where it’s a lot easier for me to work.

AllMusic: When making a record that's a time capsule of where you are in a specific moment, are you able to block out the noise of the outside world, especially with so much going on right now?

Rose: It is really chaotic, right? It seems like everything is falling apart. That’s why I make music, and why I make records, it’s the thing that does make me centered and grounded and focused. Even if you don’t understand my lyrics, if they’re cryptic, they mean something to me, that’s what I’m feeling and how I’m internalizing the chaos. It’s like residue, and now I have this record. I wish that everyone had a creative outlet or a way of expressing their feelings in a positive way. Not that everyone has to be creative, but it would be a different world if people were able to express themselves in a positive way and feel like it was an OK thing to do that.

AllMusic: I found it to be a very relaxing album, was that the way you felt while making it?

Rose: Every song is something different. I was very relaxed making it, I went back to the style of how I made Interstellar, which was I didn’t have a time frame, a time limit, I was free to work on it when I wanted, and take as much time as I wanted. So it is a lot more relaxed, because there was no urgency, it wasn’t like I had a deadline, so I really took my time on it.

AllMusic: You first mentioned the record last May. How far into the process was that?

Rose: I’d say that was the middle, I was halfway done. The mastering took a really long time, it took like three months to master this thing, I’m not sure why. For some reason it kept getting sent back, the label wanted to change things, so the process went on for a really long time. I think everyone’s happy now, so that’s good.

AllMusic: Are you good at standing up for yourself in those situations?

Rose: Yeah, that’s something I’ve learned. There are consequences, for sure, when you’re like, “No, I want it to be this way.” My whole thing on this album is that it’s gonna be what it’s gonna be, I’m going to be easygoing about it and see what that’s like.

AllMusic: Is being easygoing a new experience for you?

Rose: I think so, yeah. I learned a big lesson that it really doesn’t matter how much you worry or try to control something, it’s not going to change the outcome of anything, not really. Creatively, that’s different, I’d never hand over the reins to somebody else to tell me what to make or how something should sound. If I don’t like it, there’s no way I’d let that happen.

AllMusic: It must be liberating.

Rose: Yeah, it has been liberating. It doesn’t even matter. Things are going to blow you away or they’re not, and it’s probably going to be fine anyways. So there’s a lot of freed up mental space.

AllMusic: What are you going to fill that extra space with?

Rose: I got a dog, that’s been fun. Then I’m going on tour for a long time, which will take up a lot of my mental space, but I’m really looking forward to it.

The big storyline behind this album is that I really thought that I was done making music, I just didn’t foresee that it would be possible, and then ended up in some dire circumstances, working shitty jobs and not touring, and I never want that, it’s part of me, it’s what I do, I love it, and I’m so happy to be back and that it’s even a possibility. I’m super pumped.

AllMusic: There's a lot of layering going on with your vocals on the title track. Is that the way you hear them when you write the song or does that only come through in the studio?

Rose: A lot of the melody stuff, my vocal antics, you might call them, are written into the demos. I’ll be like, “I need it to sound like it’s coming from another room,” so a lot of that stuff is written in from the beginning. “I know this is going to be a call and response vocal,” and that comes later when you’re doing the vocals, which is a whole crazy mixing process. I drove the engineer crazy on that song, because I wanted all those voices to come from different parts of the room.

AllMusic: Do you have a shorthand way of explaining those kinds of choices?

Rose: I can be an engineer’s nightmare, because I don’t know how to explain things sometimes that are in my mind. I’ll write notes to myself during mixing that make no sense at all, they make sense only to me. I worked with Jorge Elbrecht on this album, and he always makes me send Google Docs, and I have to write them out. I don’t know how he deconstructs them, but he gets so irritated, because they make sense to me only.

AllMusic: The closing track reminded me a lot of John Carpenter's music.

Rose: Yeah, I love all that stuff, all his soundtracks, those are great. That one was tricky until the end, I had a few versions of that, and I knew I wanted it to be a big pop song, and I wanted it to have some 80s vibe, but I’m pretty happy with how it turned out. It went through a lot of changes.

AllMusic: Was there a time when the phrase "big pop song" would have been something you'd have rejected?

AllMusic: The Cure and Depeche Mode have plenty of angst, but aren't too abrasive. Did you have more aggressive music that you'd play during your rebellious years?

Rose: My mom loves the Smiths and Morrissey and Depeche Mode, but I don’t think my mother understood metal very much. I was like a little metalhead when I was 12, I would put on this radio station that was like Metallica, Queensryche, Ozzy Osbourne, that’s what was happening at the time, and I’d sleep with it on at 11, 12, 13. My first concert was the Use Your Illusion tour with Guns N’ Roses and Metallica, with Motorhead opening. I think it was also the first time I smoked marijuana, and I was 12 years old.

AllMusic: Music fans often break up an artist's career into their album cycles; do you think of your own life in that way?

Rose: There’s no doubt that my tastes change, what I wanted to make changed, what I was going through changed, and that’s all in there. If I can personally look back on my first record and be like, “This is what I was listening to, that’s the band I was obsessed with, and that’s how it bled into that song, and those lyrics are about that person,” and for me it was a timeline of what was going on. In a weird way, if I do this for 30 more years, it will be like a trail of periods, for sure. I feel like I’m just going to keep making records forever, I just like to do it.

I don’t want to make music like the first record I made anymore, or Vivian Girls, there’s no way I’d ever make a record like that ever again. It was fine in the time, I was doing what I was interested in then, but even if I tried, I probably couldn’t make a record like that now. I’m in such a wildly different place and I’ve learned so much. It doesn’t make it better or worse, it’s just different, and I don’t really have control over it. It’s just the best that I could do back then. That was the very best, and this is the very best I can do right now.

AllMusic: Are you good at not feeling embarrassment about things you made earlier in your life?

Rose: I try not to even listen, but when I do, it depends. Sometimes I’m like, “Wow, that’s pretty good,” and other songs I’m like, “Wow, that’s terrible, why did I do that, what was I thinking,” but then I remember why I thought that was a good idea, so it’s more interesting. But I think there’s none of it that I’m really embarrassed about, so that’s good.

AllMusic: Your catalog has a lot of variety to it, especially now with this record. What's the configuration for the live shows?

Rose: I have a really awesome band right now that’s capable of anything. I have a guitar player, a bass player, a drummer, and a guitar player who plays synth and a sampler. It’s really nice to have a sampler onstage, that can do a lot of the heavy lifting. People say to me, “You should not play anything and dance around,” but I don’t know how to do that. I don’t think that’s happening in this life.

AllMusic: Have you ever tried?

AllMusic: Do people give you grief for it?

Rose: Yeah. I think there’s nothing worse than people who try to make you dance. It’s the worst. Or if you somehow end up at a bar with a DJ and your friends are dancing and they’re like, “Come on!” Leave me alone, what are you doing? You’re the worst.