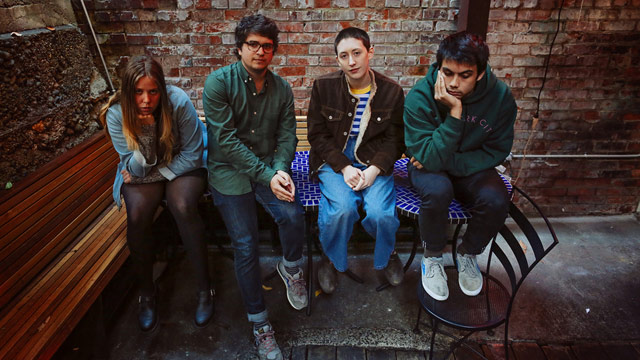 After five incredibly prolific years recording and releasing music online under a variety of different names, Greta Kline pumped the brakes and focused on her Frankie Cosmos moniker with 2014's Zentropy, a collection of short, melodic pop songs that were notable both for their bare emotional expression and crackling energy.

With her latest album, Vessel, Frankie Cosmos makes the jump to Sub Pop Records and, for the first time, is presented as a full band. In her four-star review, editor Marcy Donelson praises the record as Kline's "most assertive-sounding set to date," while retaining her core elements of "hooky melodies, a disarming lyrical style, and impressive efficiency." We spoke with Kline (the daughter of actors Kevin Kline and Phoebe Cates) about getting into the flow of a more traditional album cycle, how her brother helped her learn to love hardcore punk, and why she hopes her music isn't forced on people.

AllMusic: You pack 18 songs into 33 minutes on the new album. How did you know when it's enough?

Greta Kline: I didn’t really think about how many there were, it was more that we’d arranged probably 15 songs, and there were five or six more songs that I was really pumped on, so we spent two days on all of them, and a few stuck and a few we decided to save for later. We recorded 19, and took one off the record. That was the only thing that felt like a decision, was taking one away. Otherwise, you just put all the songs in a colander, and whatever falls out, falls out, and what’s left is the album.

The songs on this record weren’t written together or written to be together, necessarily, but I think that the ones that I kept wanting to play and to work on with the band and to record and play live, that’s what gets them put on a record. And maybe I realize later that they share similar themes, because that’s what made them stay interesting to me. I definitely wrote at least 40 songs during that period.

AllMusic: You were quite prolific in your Bandcamp days, and now you're on more of a traditional album release and touring cycle. How has that adjustment been?

Kline: It’s been a little bit more like this every time. After the last three or four, I’m pretty used to the system of having other people working on it, having a label backing it, knowing we’re going to tour with it. It’s a hard change, because I’m so used to having my extremely current emotions be out on the table, and now I’m going to tour with this record until I’m 25, which has lyrics about being 22 on it. I’m not as obsessed with having people hear what I’m working on at the moment, it’s a nice feeling to be like, “OK, what I’m working on now is private, it’s just for me,” so I can sit with it for longer and decide if I want to put it out.

AllMusic: "Being Alive" has been around for a while, how has your relationship with that song changed since 2014?

Kline: I had no plans to make that into a new version or anything, and then someone requested it at a show a few years ago. The band members didn’t know the song, so I played it solo, and my bandmates were like, “That’s a good song, we should work it out,” and it brought it back to the surface. It’s about such a specific moment when I was 16 or 17 that even when I wrote it, it was about an even further back experience, and it takes me back to that moment and that feeling, which is kind of rare that my songs do that. Usually when I play the same song a lot of times for many years, I start to associate new feelings with it and have a different experience with it and relate it to myself currently, and I think that the chorus of “Being Alive” is like that for me, and the verses take me right back to this 16-year-old feeling.

AllMusic: 16 can be an embarrassing age to be pulled back to.

Kline: There’s a little bit of that, too. Part of what that song is about is being way too intense about everything. There’s this moment in the song that’s about someone saying to me, “Maybe see you later,” and me making that into such a big moment when it’s such a passing, nothing thing, but I’m like, “What does that mean?” It’s embarrassing, but it’s also just cute.

AllMusic: It sounds like you have a good balance of taking the music seriously while not taking yourself too seriously. Was that a gradual pogression?

AllMusic: Do lyrics come to you easily?

Kline: It’s totally second nature, I feel like lyrics can come to me the fastest. Based on the way my life works recently, I do lyrics first, but they don’t come to me more often than melodies, necessarily. Writing a melody and writing a guitar part, I need to sit and be alone to do it, but with lyrics I can be anywhere, and I’m always having ideas. I think lyrics are just really fun, but I’m also easily pleased; I could write the same song a thousand times, and I have.

AllMusic: Have you ever realized that your subconscious was trying to tell you something in your lyrics?

Kline: Oh my god, yeah. That’s so much of what this album means to me, when I went back after this album was done and listened to everything, there’s so much stuff that I was writing before I even fully understood how I was feeling, and the songs have this really weird tension in them where I was writing them but I couldn’t tell you what they were about, and now I can hear them and be like, “Oh, that’s what that’s about.”

AllMusic: You've released hundreds of songs, how many of them could you play right now?

Kline: I could figure out how to play any of them, probably, but I don’t know what a lot of them are called. I have this weird thing about naming songs where I just have a feeling about it and I’ll call it that, and it’s not really related or not a lyric in the song. I just have to trust my feeling about it, and sometimes it’s a really weird name, so often the song title doesn’t remind me at all of what the song is. I’d say maybe half of them, I could tell you how it goes without listening to it.

AllMusic: As a kid, did you ever pretend to like a band to fit in?

Kline: Oh my god, completely. My brother is really cool, and he’d try to get me to like cool stuff. When you’re that age, pretending to like it is almost the same as liking it, because you listen to it and you grow to like it. I don’t think I’d have naturally gotten into hardcore, but my brother made me, so I did, and I was like, “I’m cool, I like hardcore, I like Black Flag and Minor Threat,” and then I did actually like those bands, and I still do.

But you have to fake it til you make it in terms of liking stuff that’s difficult to listen to when you’re that age. I have a friend who says that about Guided by Voices, that he had to make himself like it. I didn’t have that with them, that was a band that I instantly really liked. I think if I listen to anything enough, I’ll like it. If I make it through an entire movie, I like that movie. So hardcore was something I really tried to like because I wanted my brother to think I was cool, and then I did like it. If I really can’t stand something, I don’t think I’d make myself listen to it. But I did have guilty pleasures, like I’d never have told my brother I liked certain softer or cuter music at that time, I’d lie about it, and now I just admit the stuff I like and I don’t care.

AllMusic: I think eventually we grow out of the concept of guilty pleasures.

Kline: I don’t think I ever feel guilty about liking something unless it signifies something bad. If I’m watching a Chris Brown video and saying, “He’s such a great dancer,” and then I’d say, “This feels guilty, this is bad.”

AllMusic: In your own listening, do you find you gravitate towards music that's concise like yours?

Kline: I guess I like stuff that’s concise, but I like stuff that’s pretty different from Frankie Cosmos, I like super folky stuff, which isn’t always that concise, and pop music, which can be more repetitive. Everything’s concise in its own way. The only seven or eight-minute songs I listen to regularly would be Joanna Newsom, that’s someone who makes really sprawling, huge stories that I can stick with, but generally I have a pretty short attention span, I like three-minute songs or shorter.

AllMusic: Joanna Newsom probably falls into that Guided by Voices category for some people, it can take some effort to learn to appreciate her music.

Kline: Yeah, people seem to have a problem with her voice, where you have to “get past” her voice or something, but I don’t feel that way at all. Music that is weird in the way that hers is weird, especially her older music, you have to want to like it. I think the reason I loved her is because my good friend showed it to me and said, “This is amazing,” so I listened really intently.

It’s easy to not have that experience when you’re listening to new music, especially music that’s buzzed about, which is what I worry about Frankie Cosmos, is that people are forced to listen to Frankie Cosmos because Spotify is fueling it to them, and most people aren’t going to like it. It has to be your friend who likes it and tells you to give it a chance, then you’re going to like it. And Joanna Newsom was like that for me at first, and I grew to love it and think she’s amazing. I’ll listen to everything she ever makes.