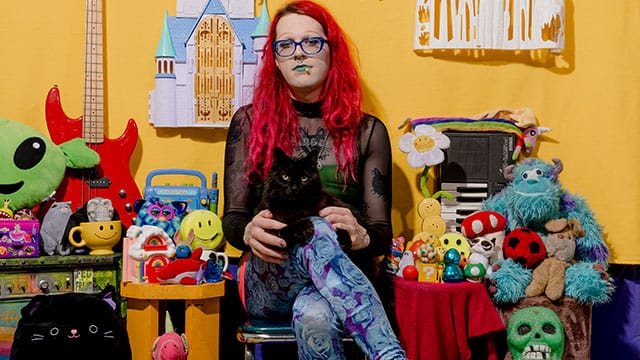 When Fire-Toolz mastermind Angel Marcloid decides to musically conjure images of a serene field, it's definitely not going to resemble the gentle, ambient soundscapes of Brian Eno. There might be some placid keyboards in the mix, but to find them you'll have to fight through bursts of distortion, screams, and digital eruptions. There's Marcloid's picturesque meadow.

Since 2015, Marcloid has been using Fire-Toolz as an outlet for her jagged electronic expression. Her earlier work was like catnip for dial-up era millennials, as familiar sounds like AOL notifications and modem chirps worked their way into the mix. Her new album, Field Whispers (Into the Crystal Palace), still features plenty of glitches, tape speed changes and crackles, alongside slick new age saxophone solos, MIDI instruments that evoke memories of 1996, and twinkling textures.

Marcloid spoke to AllMusic about the thoughtful chaos of her work, how her guitar playing carries over from her days in technical shreddy bands, and the enduring magic of Windows 3.1.

AllMusic: When you meet someone outside of the music world who wants to know what kind of music you make, what do you tell them?

Angel Marcloid: I'd probably do a little scanning of their vibe, maybe their backstory as best as I can without doing any crappy stereotypes, to see how I'd approach it. If they were younger, maybe I'd say electronic music, a bit futuristic or weird. And if it was an older person, maybe more conservative, I'd say something like psychedelic or new age, without saying electronic. That would just make them think of [makes four on the floor beat]. Something like that.

AllMusic: I listened to the new album all afternoon, and it made for a pretty disorienting experience. Is that something you strive for?

Marcloid: Something I've accepted about my music is that my perspective is often very different from the listener's, because I'm making it and going through it, and they're just getting the final product thrown onto them. For the last couple of albums, the music creation process and the mindset comes from a much more peaceful place, and I don't really know why my music comes out the way it does. I'm basically making fairly chaotic music, seemingly-disjointed music, about more simple things, things that are more peaceful and serene.

The funny thing is that to me, it doesn't sound the opposite of where it's coming from, it's just my style of expressing whatever's going on inside me. I've always had a tendency to make things really dense and complex. It's actually difficult for me to be a minimalist about most things when it comes to music and art. So I might be making something about a serene meadow, but it's going to come off to someone who just listens to it, it might shatter their world temporarily, and that's just how it's going to have to be.

AllMusic: Are you able to peel back the layers and hear something resembling a traditional song underneath all of the chaos?

Marcloid: If you're looking at the whole process of creating a song, it's totally stream of consciousness, and really sort of all over the place. You hear the last part first, cut the second part in half and put a part in the middle of it. I compose and mix at the same time, I do post-production and pre-production at the same time or in the wrong order, and it just happens.

AllMusic: Do you think the album tells a story?

Marcloid: There's always a story, there's always a concept or two. It's never linear, there will be sections of songs that are continuations of sections of other songs, in terms of lyrics, and it can bounce around like that. The order of tracks is always decided based on the mood of the way it sounds, it's never based on a storyline. The story is abstracted, and it's easier to do it abstractly, you don't have to worry about trying to make everything in the right order and make it understandable. You could say they are loose concept albums, but in such a way that is probably so out of order that you couldn't really call it that, because people can't really follow any sort of story.

AllMusic: There's guitar across the album, including some finger-tapping and other technical flashes. How seriously do you take your guitar-playing?

Marcloid: There was a time in my life where getting better at guitar was a big priority, because I was mostly playing guitar in bands, and they were bands with really complicated chords and alternate tunings. I was in a super technical shreddy noise/grind band for a little while, and I almost quit like 12 times because it was just really hard stuff. So I just practiced really hard and got way better kind of quickly, it was bizarre, and now it's not quite like that.

When I moved to Chicago six or seven years ago, because of the environment I was in, I couldn't really play drums, I couldn't play loud guitar in an apartment, I just really focused on the computer and made all my music on the computer, and any sort of guitar or drumming skill I have now is what's left over from trying to be a virtuoso many years ago. I probably haven't improved at all in 10 years, unfortunately, I peaked. I could get better if I wanted to, but at this point my main thing is electronic music, and maybe one day I'll get back into refining my guitar skills.

AllMusic: How important is solitude to you when it comes to being creative?

Marcloid: It's really important to me. I don't necessarily need to create totally alone, but as far as having that time alone, it's really important. Growing up, I valued alone time so much but didn't realize it, so I was never consciously turning down something out in the world because I valued my alone time, but I just gravitated towards being alone. Now that I realized that about myself and after a brief period of feeling like it was a bad thing, and that I needed to be more social, now I just embrace it and I'm much happier.

Some of it is anxiety for sure, but some of it is definitely just a preference for and an interest in solitude. I live with a partner and I have three cats, so it's not like I don't interact with anyone, and I work with my friends and go to work five days a week, and I'm social there, but that's all I need. I say all the stupid shit I need to say in a day, and there's Twitter for the rest.

AllMusic: There's a clear fondness for Windows 3.1 in your work, particularly in the videos. What's so special about that era to you?

Marcloid: It was pretty much my introduction to computers. I'm almost speechless about it, I just loved to explore it and look at every single program, I wanted to know it inside and out. I made art on MS Paint and I was typing lyrics and poetry in Notepad, I would try to play with Terminal and explore the registry. And when the Internet happened, I got the opportunity to use the Internet a little bit with 3.1, with America Online. The computer made a big impact on me as a child, so the sensory experience of looking at old interfaces has an emotional and really meaningful look to it. It's more of a sense thing, and language doesn't really do it justice.

AllMusic: Your cats often play a role in your music, how far back does that affinity go?

Marcloid: All my cats get sprinkled around all my music. There's some sort of memorialization of one of my cats every three to five tracks across my discography, probably, and in my videos. I grew up with cats, and always loved them. We always had at least one, and I had the experience of taking in a pregnant cat a couple of times, and it was really intense and wonderful.