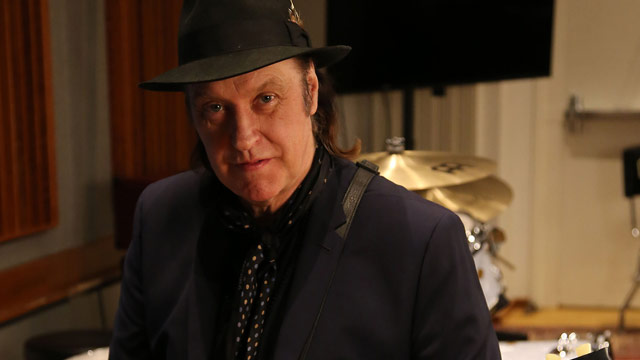 Legendary Kinks guitarist Dave Davies has been collaborating with his son Russ off and on since 1998's Purusha and the Spiritual Planet, which stepped aside from the riff-based rockers that put him in the Rock and Roll Hall of Fame, and featured more of a spacious, spiritually and cosmically-minded direction. Dave and Russ' new album, Open Road, explores similar musical territory, and carries a yearning, exploratory mindset that is the antithesis of trying to recreate his sound and style from 1964.

That's not to say he shies away from the past entirely, as the new songs from Open Road will blend with his classic hits when he hits the road in the U.S. for a run of dates, beginning April 6 in Milwaukee. We spoke with the elder Davies about the value of not overthinking songs, how the father/son relationship gets set aside during their collaborations, and what he gained from moving out to the country for a few years.

AllMusic: You've said that you approached this album on a more song-by-song basis instead of as a broader concept. Was that an obvious decision for you this time?

Dave Davies: In a way. When I first talked about ideas, Russ sent me a few ideas, song titles and lyric ideas, and it just grew out of the initial meetings we had, and it grew quite organically, really. It was interesting, I did a lot of lyric-writing, but we condense it down and try to go for the important emotional lines.

AllMusic: Is a title enough to go on sometimes?

Davies: Not in all cases, but sometimes it gives you a theme. Like the track called “Chemtrails,” for example, it’s obvious what it’s about, so you do your research and get into it from that point of view, but in the end, we trimmed down the lyrics, because sometimes you can say more by saying a little less.

AllMusic: What sort of research did you do for that song, did you end up on some weird websites?

Davies: I did some scientific research, focusing on people coming at it with scientific minds rather than conspiratorial, although that’s relevant as well, in some ways. But literally finding out the chemical composition of chemtrails and what’s in it and the names of the chemicals, so I did quite a bit of research, but in the end, Russ suggested we rein it back, and it’s more suggestive in the lyrics. You can say a lot with a powerful line or two, so I’m really pleased with how it turned out.

AllMusic: It's mostly a very melodic record, but every now and then you slice in with some distorted guitar. It's like you can't help yourself.

Davies: When I put guitar on now, I have certain tones I like, little licks I like to introduce with that tone, so it was very much a natural part of how I play in places. I think Russ did a great job, production-wise, by reining things in and suggesting areas where we could expand it.

AllMusic: Do you still like to tinker with tones and effects?

Davies: I just like to pick it up and see what I can get fairly quickly. I find all that worrying and fiddling about with knobs and that, there’s certain sounds I like to work with, but I find you can lose your way a bit if you fiddle too much. It’s the same when you’re engineering or performing, that’s why it’s good to work with someone like Russ, because he can help with what not to do as well as what to do, so I like that collaboration, bouncing ideas off of someone else.

AllMusic: Between you and Russ, who is the instigator for getting an album like this started?

Davies: I found that if I overloaded Russ, he’d just leave it for a bit, so I’d know when he was getting overburdened with ideas and things, so I’d just wait and leave it, and if he was asking me to do too much, I’d say, “Let’s leave it for a bit, let me think about it.” We all need that space to ponder and think through what we’re going to do, and I think it worked really well in that way. Russ is a very professional musician, and I found it really helpful, because I like to follow an idea to its end, but we don’t always need to go that far with it.

AllMusic: I imagine having that much time is a luxury you didn't have earlier in your career.

AllMusic: When the 1970s came around and bands were spending months at a time and millions in the studio, did that drive you crazy?

Davies: I did not enjoy that era, because it was almost like if you didn’t spend 10 hours on a guitar part, then it wasn’t going to be any good, which is absolute nonsense. It’s nice to be able to do some layers of guitars and pick and choose, but all that over the top hours and hours trying to work it out, I never got into that. Although multitracking obviously is really helpful, because you can have a few goes at doing it, but you have to start somewhere. It’s hard to know when to stop.

But I think that’s why it’s good to work like how Russ and I worked, he got a vibe, he could tell when I was pushing it a bit and it would sound a bit contrived, he’d say, “Leave it, maybe we’ve got it anyway.” He’s very perceptive in that way, and I like to think that after working so long in the studio, I kind of get a feeling when it’s going to go wrong, that if I keep going it’s not going to be as good. Sometimes you leave it and you go back to it and you think, “Actually, it’s not that bad, why am I trying to overconcentrate on it, it’s not needed.”

AllMusic: Both you and Russ were the youngest kids in your families. Do you think that shared experience helps put you two on a similar wavelength?

Davies: No one’s ever mentioned that before, there’s interesting, there could be something in that. When I was growing up I found that I had a lot of room to experiment with my ideas and thoughts. Ray and I had six older sisters, as well, which created a very nurturing environment for a young boy to grow up in, but Russ had all guys around him, so it was different. After the first few sessions of working together, writing together, the father/son thing went out the window, you have to focus as a writer and composer and try to make the thing work. It’s still there, the father/son thing, but I think that goes and it all comes down to the work you’re doing and how you can improve it.

AllMusic: I noticed he refers to you as "Dave" and not "dad" when he does interviews.

Davies: A lot of that comes from my own background, my own childhood. When you’re working with your own children, even when they’re men, that first name thing is important, for some reason, emotionally, it’s kind of different. I was the youngest of my family, my mom had me when she was quite old, I’m not sure what age she was, but she already had seven kids, and I think she was a bit embarrassed to have yet another kid, so she didn’t tell anybody that she was pregnant until a month before I was born, and that was kind of weird. I had a really good relationship with my father, but he was old enough to be my grandfather, so I thought, “When I have kids of my own, I want to still be young so I can have a different kind of bond with my kids than I did with my own parents.”

AllMusic: Who was a wilder kid, you or Russ?

Davies: Russ was pretty cool, he had his wild moments, like all kids do, and when you have intelligent and creative kids around, they do push you, they test you, but that’s the nature of things. I was really pretty wild in my upbringing because of the time we were in, working class kids growing up in a working class family, in more limited conditions, it was a very, very different world I grew up in than Russell did.

AllMusic: For a while you were living out in a rather remote area. What did that do for you?

Davies: I lived there for a while, in North Devon, and I loved the area. I’m a big fan of the old Basil Rathbone, Nigel Bruce shows, the early Sherlock Holmes films, the fantastic, gray-looking films with lots of silhouettes and fog on the moors and stuff, so I’ve always had a feeling for that part of the English countryside, I like that desolation and the way it makes you feel, it’s different from being in the city. It’s very inspiring, the freedom that it gives. It makes people think differently when you put yourself in that kind of environment, and I think it’s really healthy. I’ve always done the thing where I like being amongst the city, and then I feel I have to get away, so I go away and come back. I like both for different reasons.

AllMusic: You were probably able to clear your head quite a bit.

Davies: It does help you put your life into perspective. We spend so much time in modern life being totally bombarded by all kinds of information and people talking and shouting and noise, it’s really important for all of us to take a step or two backwards and detach a little bit. That’s why meditation is important, we have to create space between us and what’s going on around us to get any kind of perspective on what’s going on. It is something that I’ve cultivated over the years, it’s a survival technique, really, to stop being so engrossed in other people’s emotions and other people’s lives. After a while, you can’t see where you end and someone else begins. I think we all need a little bit of space around us sometimes.

AllMusic: When you gear up for a tour, do you even bother rehearsing the old Kinks songs you've played a million times?

Davies: It’s always nice to refresh old ideas, maybe we can do that bit different or change that, so we’ll go through the whole set and have a look at where we are with it and maybe introduce a few new ideas into the old songs.

AllMusic: You have to keep them interesting somehow.

Davies: Of course, yeah. You have to take some sort of chances with music, otherwise it loses its impact as live music, so I try to keep it fun as well. You can go mad doing the same things over and over again. What’s that saying about “how do you define madness,” that it’s doing the same thing again and again and expecting a different result? It can be. Life on the road is a kind of madness, but it’s addictive, as well. That fact of being with an audience and they’re there with you, it’s really a wonderful feeling, which is what it’s all about, that communication.

'Open Road' is out now, and Dave Davies' U.S tour begins in Milwaukee on April 6.