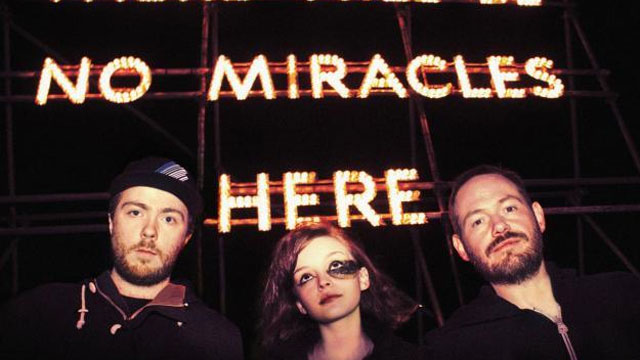 Glasgow's CHVRCHES are having a moment. The Recover EP's titular single made it into the top 100 of the UK Singles Chart, the band played SXSW and are headlining on their first North American tour. They are, by all metrics, having a stunningly successful debut. How could CHVRCHES earn any more goodwill on the internet hype machine?

Turns out there is one foolproof way to do it: covering the theme song to the hottest tv show of the moment. HBO's Game of Thrones season 3 premiere garnered more than 4 million viewers, and is well on its way to becoming one of the most pirated programs in history. Behold its regal, string-and-drum-driven title sequence:

The CHVRCHES cover turns it into, well, a CHVRCHES song:

Surely even the most jaded and disaffected music blog commenters felt their hearts melt at the 25-second mark when lead singer Lauren Mayberry bursts out with her off-the-cuff lyrics "do-do-do".

What's striking is that Game of Thrones by its very nature (medieval-esque fantasy) is less of a venue for musical discovery — unless you're really into lutes or something, I guess. There are no radios to be turned on, no concerts to attend, no too-perfect period hits to underscore the emotional depths of the characters (à la Mad Men). The score is almost entirely orchestral, and it's beautiful and wonderful, but outside of the main title theme, it's one of the few parts of the show that hasn't become cultural touchstone. Notably, one of the only non-orchestral musical moments on GoT actually involves another group of indie darlings, namely The National who contributed the plot-integral "Rains of Castamere" to the season 2 soundtrack.

Clearly, Game of Thrones is well on its way to becoming an iconic show, and iconic shows need enduring title themes. Think Law and Order, Cheers, Friends, and The Fresh Prince of Bel Air. Those themes ended up being hugely defining parts of their respective shows, and who can blame musicians for wanting to put their own spin on an icon? It certainly explains why Hüsker Dü would want to take on the theme of a legendary series set in their Twin Cities home, the Mary Tyler Moore Show:

What are your favorite title themes and/or covers thereof? Declare yourself in the comments!