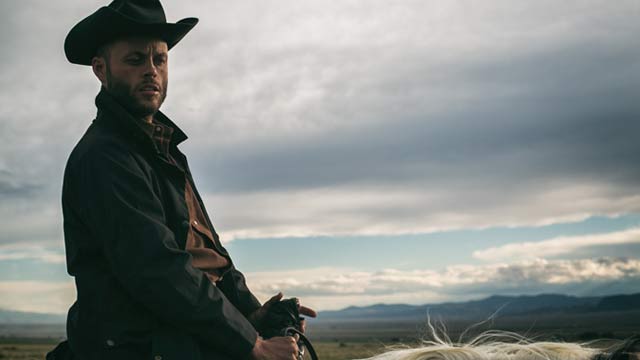 "I didn't need the revelations of 2020 to sing Welcome to Hard Times," Charlie Crockett says. The budding country and Americana musician had just come off of The Valley in 2019, an album that confronted his mortality in the face of an impending open-heart surgery, and was struck with a sense of, OK, I faced death and lived -- now what?

It isn't just the surgery that Crockett survived; he's also persevered through poverty, years spent performing on the streets and trains of New York City, a pair of felony convictions, and a music business that seems hellbent on painting him into a traditional country corner. So when producer Mark Neill called with the idea for an album that tapped into the stark, often dark country aesthetic of George Jones and Sanford Clark in the 1960s, Crockett was ready to make the record that, in his estimation, no one else could.

Over the phone, Crockett comes across as a contemplative and curious mind who can simultaneously enjoy classic western movies while also pointing out their myriad blind spots, or can spend a ride on the tour bus listening to Number 1 hits from the '50s in an attempt to discern where payola took hold. In edited excerpts from our conversation, Crockett discusses his intention to create "pure cinema" with his new album, how a controversial but still relevant song from 1967 made its way to the record, and shares memories of his days performing on the New York City subway.

AllMusic: How conscious are you about balancing the playful side with the darker aspects of 'Welcome to Hard Times'?

Charley Crockett: If you asked my girlfriend about how I am, she'd say, "I've never seen anyone who could be so optimistic about everything, and then so cynical and critical about themselves," so I guess there's that playfulness mixed in with that sadness. That's why when Mark Neill called me up, I was waiting for him, because I'd talked to every producer in America, and they were all the same, if I'm being honest. They saw how I looked, saw that I could sing country, blues, jazz, soul, and I'd be useful for their purposes, and that was it. When Mark called, he saw what I could do with gothic country, with country music when it was a high art. He said, "Do you want to make the high art '60s country music that none of these other guys will touch? I think you're the only guy that will make it." I can put everything I want to say in that music. When anyone remotely commercial comes at me, all they see is a throwback. They see me romanticizing the past.

People might find it strange, how I'll sit there and watch '50s western after '50s western, and if you didn't know me, maybe you'd think I was just lost in the past or something. But I'm mystified by watching someone like John Wayne romanticize the genocide of Native Americans, and seeing that juxtaposed against James Baldwin, recognizing that he is the Indian. Or Buck Owens singing about lost love alongside Bob Dylan facing the war machine, in the same year. If you just came on my bus and saw me watching westerns, you'd maybe think, "What's he doing, watching this whitewashed shit?"

I think maybe that's why my songs sound like they do, because when I'm watching those old westerns, none of the whitewashing or political statements being made by the absence of the issues of the time are lost on me. That's why I watch it, there's way more stimulation to me in what is not being said in art, as far as music and films, in the '50s and '60s, than the so-called politically correct bullshit going on today. A lot of that stuff is much less interesting to me, it's maybe even more controlled and more of a disinformation campaign than it was back then.

AllMusic: The dark side really comes through on your version of "Blackjack County Chain," where did you first hear that song?

Crockett: I first heard it on the 1968 Sanford Clark album They Call Me Country, which, to me, is one of the greatest country records ever recorded, especially for the time. It wasn't a commercial success, but a lot of the great records that end up influencing other artists aren't, necessarily. It's the last track on the album, and it's probably my favorite version. He plays it the fastest I'd heard, and it just struck me, I saw myself. I saw how easily a wayward man, especially someone of adversity, whether it's for ethnicity, for skin color, for social class, economic class, how easily somebody could fall into that type of slavery. I saw it as now, I saw it as 100 years ago, I saw it as 50 years ago, because the imagery was so vivid, like these westerns we talked about.

When me and Mark made this record, we saw this as a movie, we saw it as pure cinema, and we could present them in such a colorful way that the mind would have no choice but to make a movie out of it. And that song said everything I wanted to say. I wrote the rest of the songs, but sometimes somebody else writes the song for us, then we sing it and give it its own life. Red Lane wrote that song, and he has the other really great version of it, with some really heavy baritone guitar. He wrote it with Charley Pride in mind, and when I recorded it, I didn't realize he was specifically imagining an African-American chain gang in Georgia. You could see it that way without knowing the history, but you could see it a lot of ways.

Red Lane wrote that song and pitched it to Charley Pride, and he passed on it. He was basically the only Black man in country at the time, and I think he passed on it for good reason. Willie Nelson cut it, and it reached around Number 20 on the charts before they banned it, and that was so interesting to me. I think that maybe in 2020, "Blackjack County Chain" might be as taboo today as it was back then.

AllMusic: It sounds like you and Mark had a very specific goal in mind for the record; did that require a different sort of energy from you than on the other albums?

Crockett: Everybody that writes about me makes a big deal out of The Valley and how it was this life or death record, and it was, I recorded it a week or two before I had open-heart surgery. If I had been left to nature, I'd already be gone. So as much as that record seemed to be about mortality and the question of eternity, this one is way more about that. The Valley is me not knowing what was going to happen, and Welcome to Hard Times is the answer.

In a way, there was some innocence not knowing what would happen with those surgeries. That record is somebody writing about dying, and then this record is me writing about living, making it through it, and then you're forced to deal with the fact. Looking at the scar on my chest, I'm forced to think about, "By the creator's design, maybe you weren't supposed to be here."

AllMusic: You spent years playing on the streets in New York, particularly in train stations and on the actual trains. What was your criteria for picking a good spot?

Crockett: You can't really play at rush hour, because it's too busy. On the platform, there's too many people, the trains are coming one after another, and you know how loud it is, you can't be heard. That's part of the reason you see more the drummers on the pickle buckets and the breakdancers, they can play right through that. But if you're singing and playing instruments, you can't compete with a train. One of the reasons the Metropolitan Avenue stop on the G train is so coveted is because the G train is so slow. I played up and down that G train. The G, the J, and the R, and the 6 train were our main trains. We called the 6 "the penthouses," because you go up the Upper East Side, and that's where you got the big money.

You can't make any money in a jam-packed subway car, and the best time to play is from 10 a.m. to basically 4, you need to stay out of the rush hour in order to be able to get people in a frame of mind to tip you. It's also highly competitive, and you're supposed to have a permit, but they didn't enforce it when I lived there. If you were unamplified, they wouldn't enforce it, but if you had a speaker, then they'd enforce the permit. There's all kinds of tickets they can give you, especially on the train itself. They can give you one for blocking the door, a panhandling ticket, a ticket for decibel level.

AllMusic: Did you get all of them?

AllMusic: Did you pay them?

Crockett: I think you'd end up having to pay them. You'd see the same cops, but they were pretty tolerant. We were very successful, we could win anybody over, for the most part, and the police tolerated us for that reason. If people tolerated what you were doing, you didn't get in as much trouble. If you were driving everybody crazy, you were more likely to get in more trouble.

Ryan Bingham's Bull Riding Songs, and a Behind the Scenes Look at His New Al ...

Ryan Bingham's Bull Riding Songs, and a Behind the Scenes Look at His New Al ...