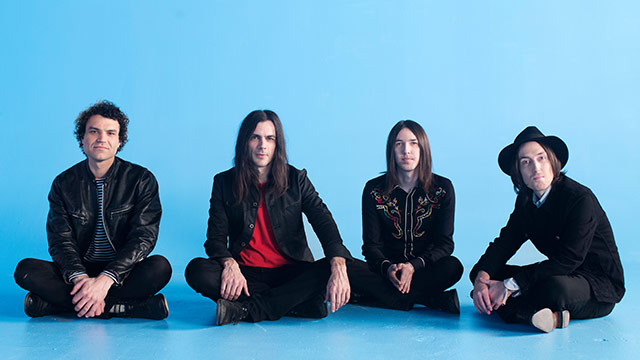 Brian Bell is especially proud that Clara Obscura, the second album from his band the Relationship, features layers that are revealed with repeated listens along with its more immediate pleasures. As a boy, he learned to read and notate music at nearly the same time he was learning how to read words, and that second nature carried over into the meticulously-crafted songs that make up his latest collection of intensely-catchy, emotionally-driven power pop.

We spoke with Bell about the care that went into making Clara Obscura, why it's so exhausting for him to perform the songs live, and the lie that landed him the Weezer gig.

AllMusic: When you come up with a song as big and catchy as "Break Me Open," do you know right away that you have something good?

Brian Bell I always knew that song was strong with the riff and the chords and all that stuff, but once you’re in the process of recording it, things change some. The sounds you use, harmonically it’s more sophisticated than the average person probably even realizes. I’m sneaking in some pretty tricky stuff in there under the guise of a very repetitive, stupid riff.

AllMusic: There's nothing wrong with a stupid riff.

Bell No, there’s not at all. In fact, I tried to make the riff a little more sophisticated by putting a tie between beat four and beat one, holding a note across a bar line, which had a cool sound to it, but it wasn’t as immediate. There’s something I do like about music that’s not immediate. There’s a lot of layers on this record that you’ll hear after the third or fourth listen and not even realize they’re there, and I like that about music, I like that process of building layers and hiding layers: the foreground, middle ground and background of music.

AllMusic: Do you like tinkering with the sounds themselves?

Bell No, not really. I more tinker on the side of the composition, like, “This chord should have a suspended note, this should be a minor seventh,” I’m more into melody and shading, and then you find the right sounds. And it’s not only sounds, but it’s the energy behind it that you feel while you’re playing it, that’s important and comes through in the recording, what you were feeling when you played it. If you were feeling different, it would sound differently. Getting in the right head space is important to me.

AllMusic: Do you actually chart and notate these songs as you write them?

Bell I do, I notate. I don’t do everybody’s part, the bass player can figure out his own method, but I notate to make sure things are lining up how I want them to. I come up with ideas while notating, and I love the process that goes on in my head while notating, it’s like the opposite of reading music. It’s taking sounds and putting a nomenclature to symbols, and you discover things about music by doing that. That’s one part of the process I actually enjoy. It can be tedious, but it’s a tedium that I see benefits from. That’s why when you have an ensemble of players and you’re trying to explain a song, you can speak in intellectual terms, “This is on beat four, don’t lift this note until beat two of the next bar,” that kind of stuff, and I’ll already know it works, because I have it written out. And it makes the studio time more efficient, and we’ll have time to tinker with sounds because all the other stuff, the articulation and dynamics, those were thought of ahead of time.

AllMusic: Does that make you thankful for the childhood saxophone and piano lessons?

Bell Absolutely. It’s so much a part of me, I learned to read music at the same time I learned to read English, so I almost know no other way. I don’t know if it’s a hindrance or not, but whenever I’m in a rut, “I don’t feel any inspiration right now, I’m going to pick up a piece by Chopin and start sight-reading," and I get immersed in the language of music and the beauty of a composer’s mind by doing that more so than even putting on a record, just playing it myself. Then I can have a greater understanding of music and it’s always mysterious and always baffles me and always makes me happy.

AllMusic: Songs like "Working On Myself" and "Hate That I Love You" carry a lot of momentum without feeling rushed. Is that a delicate line to tread?

Bell “Working on Myself,” it comes out in the composition and in the lyric content. You asked if I tinker with sounds, and I said I tinker with the emotion behind the execution, so when I’m doing “Working On Myself,” I know what the song means to me, and there is a sense of urgency, and I’d better figure my life out, that’s kind of what I’m saying, before it’s too late, and I keep that feeling internally while I’m playing, so that has to come out in the music. If I was completely complacent and happy with everything and then recorded that song, I don’t think it would have that sense of urgency.

AllMusic: Do you enjoy writing lyrics?

Bell I like lyrics that mean something to me. I’m very direct with my lyrics, I wish I could be more poetic, I wish I could be a lyricist like the lady in Beach House, I love that kind of stuff. That’s not really where my mind goes, mine is more storytelling, hopefully without too much narration, but just trying to pick an emotion that I’m feeling without specifically saying exactly that, but pretty close to it.

AllMusic: The album ends with "This Year's Children," which is all piano and strings. Do you write those lyrics differently than songs that will be guitar-driven?

Bell I was mirroring the first album, which ended with a piano-driven track called “Master Plan,” so I thought this album ending the same way, with me playing piano. First, I thought about how it should be recorded, and decided piano and drums should be the primary foundation of the recording, and so we built off of that. It wasn’t really a song that we worked up in rehearsal so much as we did it in the studio, and then fine-tuned some lyrics, and once I figured out what the bridge should say, the song wrote itself.

When we did our shows, we played the whole album front to back, we did every song. It’s slower and you have to feel the audience out. This is a record from top to bottom that’s supposed to be in this order, and this is the way we end it, with an uplifting, hopeful message.

AllMusic: Did you learn anything new about these songs after playing them live?

Bell I learned that to put on the greatest performance of the record, I had to relive, almost like a Method actor, all the emotions that I’d felt while writing and creating it, and performing it took a lot out of me. At the end of the night, I was drained, physically and emotionally, just from going through those songs again. I don’t want to do that every time I perform, but you’re almost cheating an audience if you don’t feel that yourself, how are they supposed to feel it?

AllMusic: What happens after a show when you're emotionally drained and people try to talk to you?

Bell I just snuck out. A good friend who I hadn’t seen in a while came up and started about something else and I could not deal. I was kind of rude, in a way, I said, “I’m sorry, I have to sneak out, is that back door open?”

AllMusic: In a way that must also reinforce upon you that what you're doing is genuine.

Bell I’d put a lot of pressure on myself to do it, and luckily it’s all recorded, so I don’t have to do it all the time. If people want to live that moment with me, they can put on the record. I don’t know if everyone wants to feel that, that’s another thing I’ve learned. Maybe it’s better to do music that says absolutely nothing and is fun and has a good beat, because a lot of times our brains want to escape, we don’t want to feel. This music has feeling, and if you want to feel something, you’d listen to it.

AllMusic: When you tour are you the kind of musician who always has a guitar in your hotel room?

Bell I’ve been doing that less and less. We have guitars in the dressing room, and a keyboard. Maybe on a day off, sure, but your body’s run ragged from traveling, and carrying another thing around is a bit much. If there’s a new song we’re going to be performing, I like to run through it. I don’t really need the hotel thing as much as I once thought I did. If I hear an idea in my head and I have to capture it, it’s something I can record real quick on a voice memo and get to an instrument and it will be fine, as long as the idea was sung into a voice memo or written down. I won’t say I write without an instrument, but it seems like I can capture things after the fact, too. When you’re home, sitting on the couch, and an idea comes out of the ether that you weren’t thinking of, it’s great that you were playing guitar for those four hours.

AllMusic: Were you always a comfortable singer or did you develop it later?

Bell I think I developed it later, and I’m still becoming more and more comfortable with it. I saw Björk the other night at the Philharmonic, and I was blown away by how great her vocal is and how much control she has with her dynamics and range. You think you can sing, and then you see someone like Björk, and you know you have a long ways to go.

AllMusic: Björk is always the goal.

Bell Somehow she keeps her artistic integrity without being pretentious, she’s her own thing, she’s developed her own sound and she is the innovator.

AllMusic: When did you start taking your vocals more seriously?

Bell I took them seriously from the minute I joined Weezer, because I kind of got in the band because I lied my way about how good of a singer I was, and I needed to actually sing, so I immediately started taking some vocal lessons and just worked on it and worked on it. That’s one of our secrets, is how much emphasis we put into vocals and background vocals, and those rehearsals were way longer than our actual band rehearsals, just vocalizing around a piano until we sounded passable. Now it’s much easier to do things, my voice is much stronger, but it’s definitely something I still do and still work on.

AllMusic: You were doing lead vocals on "Susanne" with Weezer for a while.