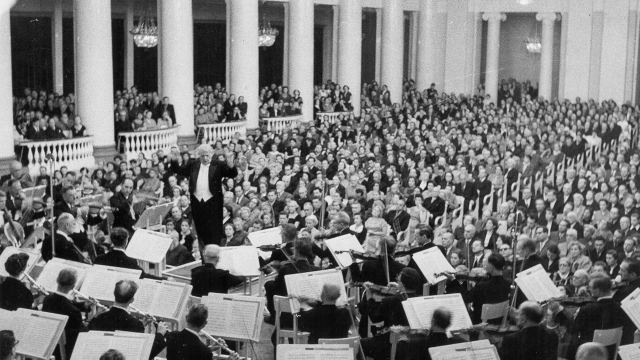 We like to share interesting bits of music news with you, but today we thought we'd look back at a moment when history and music collided. On this date 50 years ago President John F. Kennedy was assassinated, and as the news spread across the country and around the world, folks found different ways to pay tribute to the fallen leader while trying to make sense of the tragedy. Back around his hometown that day in 1963, the Boston Symphony Orchestra was scheduled to play its regular Friday afternoon concert -- and as they learned of the day's events, per Upworthy, they shifted gears:

In a powerful — and stunningly level-headed — decision, the orchestra's music director, Erich Leinsdorf, sent librarian William Shisler to get the music for the funeral march from Beethoven's "Eroica" symphony. Shisler quickly distributed the music onstage, letting the musicians know what had happened. ... conductor Erich Leinsdorf delivers the news of President John F. Kennedy’s assassination to a shocked audience. Leinsdorf then announces that the orchestra will play the Funeral March from Beethoven’s third symphony.

For more about that afternoon at Symphony Hall, NPR has a detailed account of the historical concert.