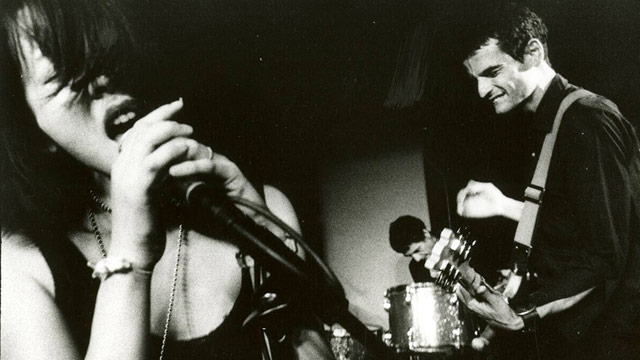 ​Long-running New York City trio Blonde Redhead spent its 2016 celebrating its history, performing a series of shows focused on its 2004 album, Misery Is a Butterfly, and reissuing early recordings in the Masculin Feminin box set, while also preparing for where it's headed next by writing and recording songs for a new EP, 3'oclock. Drummer Simone Pace walked us through the past year and shared a glimpse of what's to come, which includes new shows, new music, and new baked goods.

AllMusic: I imagine an artist looks back on a passing year a bit differently than someone who has a more routine existence. How did you keep busy in 2016?

Simone Pace: I suppose it is very different. I seem to be busy all the time with something, I’m the type of person who doesn’t like to do nothing, I’d rather keep creating. Whether it’s a hobby or music or cleaning the house, there’s always a lot that can be done. When we’re not on tour, and in this period, for instance, we’re writing songs and recording for an EP that’s going to be coming out soon with four songs on it.

As far as myself, I went to play on a record in Montreal for the singer of the band Wintersleep, I played on four songs, and I’m also working with Amedeo [Pace, Simone's brother and Blonde Redhead's guitarist] on playing behind a collection of experimental films from the sixties and seventies, and we’re going to be performing that live in January, so that takes time. Besides that, I have a collection of motorcycles, and I maintain them and do all the mechanic work, and some restoration for other people.

AllMusic: Were there any projects that you hadn't planned on that consumed a big chunk of your year?

Pace: I think the thing that took the most time was preparing for the Misery tour, which we did with the violins. We did it in Italy first, with rehearsals to get the parts ready, and that was quite a bit of work. It wasn’t surprising, but as far as an impact in our career, something that’s different. It was very much a surprise, because it turned out to be much better than I thought it would be. It’s amazing to have so many musicians around when you perform, and we’re three usually, but we were seven or eight onstage, the impact that the music has when you have so many people playing together, it’s really special. That’s something we want to keep doing, and that I think was fairly successful when we did it. Otherwise, it was just touring and working and planning things. We didn’t have a record in 2016, so it wasn’t that exciting under those circumstances.

AllMusic: Putting a new spin on those songs must have been refreshing.

Pace: Yeah, it’s great, because you have to adapt to a new situation and re-learn certain things and play differently and approach the music differently. So I feel like as long as things keep feeling like you’re learning something and you can make a difference, that’s the most important thing. Touring is great, and you get so much out of touring, and it makes a difference in people’s lives, to a certain extent. And being able to make a difference in yourself is more crucial as you go along, especially with a band that’s been around for so long.

AllMusic: Have you always been welcoming of challenges or are you a comfort zone kind of guy?

Pace: Generally, I love learning things. I’ve taught myself pretty much everything, how to work on motorcycles, cooking, baking with a sourdough starter, which is very time-consuming and you get a lot of disasters, but I love the challenge of learning new things. Making music, especially in a band, you sort of have to forget everything you’ve learned when you go on to a new record and just start from a place where you feel like you’re more vulnerable, but you’ll know that state of mind can bring interesting mistakes and interesting situations where music will flourish.

So that’s the hard part about change, I think, because you are proud and feel like, “I can do this, I’ve done this before,” but that’s not a good attitude to have, it’s better to say, “I want to do something I haven’t done before and try for that,” even if it’s not the most natural thing. Some people say, “I’ve been doing this for so long, for 20 years, trust me,” and to me, that’s the wrong attitude, at least for our band. We’re always starting from a place where you feel like you can challenge yourself, and part of that is working with Amedeo and Kazu [Makino] and with what they bring and how everything is chaotic at the beginning, but exciting at the same time, and then you see it become concrete, with the right essence to it. It’s not an easy process.

AllMusic: Does that openness carry into the new songs you've been working on?

Pace: The four new songs have a little bit of a lighter spirit, because we recorded them without having too much expectation, at least for me. Usually when you make a record in the studio, you have a month or whatever and you have to finish by this date, because money is going to run out, or for whatever reason. For the songs “Three O’Clock” and “Golden Light,” it was a more relaxed process, because we’d had a chance to play them live with the string players, which made us think it would be nice to record it with the strings, and we followed that path, so it’s good that we took that time. I was going to push to put them out, but I’m glad we didn’t right away.

The other two songs, Amedeo’s been doing the vocals for them. For one, we went to a percussion player who was supposed to be on Barragan, we’d recorded with him for a week, but our producer couldn’t find a place for him in the music once we got further along, so this is a good chance to redeem that. I really love playing with him, and it will have a lot of new sounds for us. I don’t know what the name of that song is yet. The other song is an old song that we’re re-recording, which we found in our library of messy tracks. Sometimes you find new things and you get surprised with some ideas, and we thought it would be good to get it going again.

AllMusic: How much of your 2017 is already planned?

Pace: It’s not bad yet, actually, but stuff is being planned. From the middle of February through March, we’re touring in Europe, and then there’s more dates being organized for the Misery shows. As far as recording another record, we’re a bit on hold right now. We’ll see how the EP goes, and then we’ll think about it. We’re really slow at recording, it takes us time, we have to be in the right frame of mind. We do a record every three or four years on average, so we’ll see, but I hope we make another one.

Blonde Redhead will be back on the road in February.