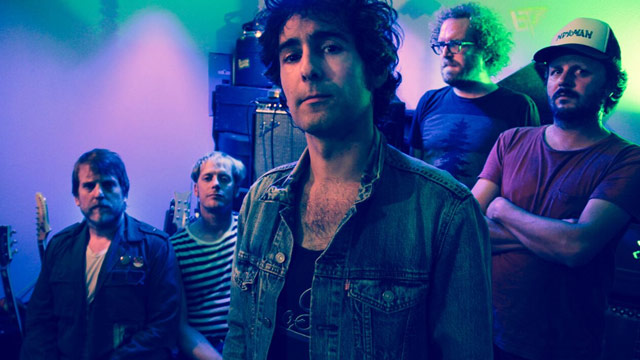 Wild and Reckless, the latest album from Portland's Blitzen Trapper, continues the band's evolution from indie rock into open-road troubadours, resulting in a tone that editor James Christopher Monger calls "Bonnie and Clyde meets Fear and Loathing in Las Vegas," blending dark tales with the band's Laurel Canyon and country-folk aspirations. Frontman Eric Earley spoke with us about his predilection for the seedy side of things, being nervous about touring with one of his heroes, and his attempts to imitate Queen's production techniques.

AllMusic: When did you first develop an appreciation for stories with dark twists or seedy elements?

Eric Earley: A lot of this stuff is stories my dad told me about where he grew up in east L.A. in the 40s and 50s. My dad also used to read me a lot of stories as a kid; there was one in particular about a haunted mill; in the town I grew up in, it was empty and derelict, in the middle of town, and he was reading this story about these boys who would go there. Something about that always stuck with me.

AllMusic: And did you go there?

Earley: Oh yeah, he’d take me there, we’d go walk around and he’d say, “This is just like the story I’ve been reading you.” The old Pendleton Mill, it was just in the middle of town and empty, so you could just walk in if you wanted.

AllMusic: "Baby Won't You Turn Me On" from the new record sounds like a song that took some adult experience to write, like you couldn't have written that song when you were 22.

Earley: Maybe. That song is kind of about a stone-cold loser, basically. “Smoking til I can’t get stoned, drinking til my birds are flown, all the kids have grown,” so some aspects of it are like that.

AllMusic: Did you start that song with a mental picture of a person and go from there?

Earley: It was more just people I know, including myself. Some of it is me looking back at myself in my 20s and 30s, no money, living from day to day. For me, parts of it have more to do with when I was younger than me now. I feel a lot more driven now. I was driven back then, but only in certain ways. I didn’t have the wherewithal to make something of myself. I think it could go both ways, definitely.

AllMusic: The band has been active basically nonstop since it started. Do you even notice how much you have been working?

AllMusic: Do you do any writing that isn't tied to music?

Earley: I’ve written two or three novels that I’ve worked on over the last 10 or 15 years, lots of short stories, and I write continually. I haven’t really put anything out, that’s a whole other industry that is equally as challenging as the music industry, maybe more so. But recently, I’ve been making forays into it, because I do have quite a bit of finished work. Eventually, I would like to publish and make my way into that area.

AllMusic: Have you had any especially pleasant experiences with meeting musicians you admire?

Earley: We toured with Wilco, and hanging out with Jeff Tweedy and those guys was super amazing, I learned so much. Then we toured with Stephen Malkmus, who, back in high school, was my hero, so touring with the Jicks was really great, that was super fun. We toured with Brandi Carlile, who I just love her songwriting, she’s probably one of my favorite songwriters, so I feel like I learned a lot from her and the way she performs.

AllMusic: How big of a deal was it meeting Stephen Malkmus that first time?

Earley: I was a little nervous, I’m not gonna lie. He was just such a huge hero of mine. And I occasionally see him around town still, I saw him a few months ago and I was still a bit nervous. He was with his kid in the grocery store and I was like, “Hey, Steve…” But he’s just such a cool dude, and he’s super into sports, so he was geeking out on sports most of that tour, which was pretty cool.

AllMusic: Has having different musical preferences ever ruined any of your friendships?

Earley: Maybe it did and I didn’t really think about it. The music people listens to defines them in certain ways, and you grow up and grow apart from people not necessarily because of music, but it’s a symptom of “you’re not really on the same wavelength.” One of my best friends growing up, I could see that, he got into 311 and Third Eye Blind and things, and I remember being like, “Eww.” I don’t think we necessarily grew apart because of that, but that was definitely a symptom.

AllMusic: What about pretending to like an artist for someone else's sake?

Earley: I might have tried for a second, but I don’t think I ever had the personality to actually follow through and be like, “Oh, I love these guys.” It’s funny, because years ago I had this girlfriend who loved Wilco, and I wasn’t into them at the time, this was like 12 years ago, or maybe more. I wasn’t into them, and she was always playing them and I’d be like, “Gosh, you’re going to make me listen to this again?” Then later on, I was like, “Oh crap, this is one of the greatest bands of all time, I love these guys.” At the time, I was wrong.

AllMusic: Is there a particular album session you wish you could have witnessed?

Earley: Neil Young’s Tonight’s the Night, I read about it in his book, and that sounded amazing. He recorded it at a bar, in a pool room, and they drove the studio in and busted the wall out and ran everything in from outside, and it sounded like a rad session. That would have been great, to hang out there. Back in the golden age of studios, like when the Beatles were recording, that must have been unreal, to have all those people working on a record, all the musicians coming in and playing, none of these fake strings and stuff like that.

Seeing Ziggy Stardust being made, that would have been amazing. “Are people going to like this or what?” I wonder if they had the same fears, I’m sure they did. If I was to pick one, I’d want to be in the studio when Queen recorded “Bohemian Rhapsody,” and really the whole Night at the Opera record. It’s just unreal, I don’t know how they made it.

AllMusic: Is the density of that something you've ever tried to emulate?

Earley: Yeah, I’ve definitely done that. Our earlier records, like Wild Mountain Nation and Furr, there was a lot of layering. Then Destroyer of the Void had a lot of vocal layering, and I was trying to emulate Queen’s vocal layering, in certain ways. But those guys, they had technicians and engineers, they knew what they were doing.