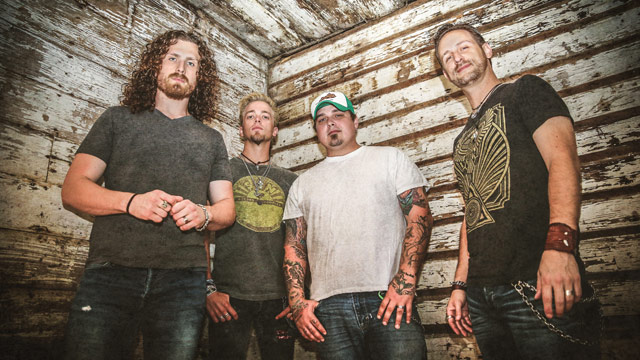 Black Stone Cherry has been kicking out the jams from their home state of Kentucky for over 10 years, putting out four records on hard rock label Roadrunner Records before moving on to Mascot Label Group for their fifth record, the aptly-titled Kentucky. But fans probably don't give as much of a damn about the label as they do the tunes, and Kentucky features some new sounds from the band, including the gut-rattling low end on lead single "In Our Dreams" and a horn-accented romp through Edwin Starr's classic "War."

We got frontman Chris Robertson on the line to talk about the new music, the band's experience producing themselves for the first time, and how a song from six years ago managed to become Kentucky's first single. And as an exclusive, you can snag that track, "In Our Dreams," as a free download for a limited time, just click through to Soundcloud.

AllMusic: "In Our Dreams" has the heaviest guitar sound you guys have ever used. How did you get that?

Chris Robertson: A big factor of that is that the song is tuned down extremely low, it’s actually tuned to drop A on baritone guitars. We use the same stuff on that song as we did our other songs, with the exception of playing baritones. The tuning gives it that guttural sound, a regular guitar is E to E, and we tuned it down to where the lowest string is A, so it’s extremely low-tuned.

AllMusic: What about the song made you want to go for that sound?

Robertson: It’s funny, we wrote that song in 2010 for the Between the Devil & the Deep Blue Sea album, and the previous record label and producers we worked with didn’t like the song. We wanted it on every record, Devil & the Deep Blue Sea and Magic Mountain, and there was always a producer or record label saying, “No, we don’t like that song.” So when it came time to do this record with us self-producing the entire thing, we got to pick the songs we wanted on the album, and that was one that was always going to be there, and the new label thought it was the first single, so it worked out great.

AllMusic: Were you careful not to tinker with it too much over the years?

Robertson: With that song in particular, we basically took the demo and played it exactly like we did, even the guitar solo on that, it’s the same guitar solo I played on it six years ago when we wrote the song. That’s a song we’d always loved so much, so we didn’t change anything about it.

AllMusic: Did you learn anything new about your own music from producing the album yourselves?

Robertson: This record was recorded in a really small studio back home, the four of us produced it on our own with an engineer, and we went in and did the record the way we wanted it to sound. We figured after 10 years of putting out records and working with some of the biggest producers in the active rock world, if we can’t figure out what our band needs to sound like, then we have more problems than needing a producer. This is the first time that it’s just been the four of us, doing what we want, making the record what we want it to be, and I think you can hear that. There’s something about this record that you can hear, it’s big and heavy, but has a youthfulness to it that we haven’t captured since our first record. There’s something really fun about the album, even the heavy, serious songs have a fun element about them.

AllMusic: Have you made any friends in the music world who have surprised you?

Robertson: Aaron from Staind is a good friend, and you have Mark and Myles and all the Alter Bridge guys, I never would have thought when I was in middle school and high school, listening to Creed records, that I’d have Mark Tremonti’s phone number and could just call him and say, “Hey dude, what’s going on?” We were all big Creed fans, big Alter Bridge fans. And I’m not friends with him, but I met Jimmy Page. It’s the coolest thing ever, getting to meet the people you’ve looked up to for so long.

AllMusic: You can't overthink those interactions or you'll end up disappointed.

Robertson: When I met Slash, it was a breezy, “Hey, how you doing,” handshake, and he was on his way. I just said, “Hey man, how are you,” and he was leaving the venue, it was during Velvet Revolver, we were playing Rock on the Range, he stopped and asked my name, what band I was with, smiled, and that was it. But that was so cool, that he took the time to stop and say something. You meet people who act like it’s a burden to them to say anything to anybody, that’s never cool. I’ve had that happen a time or two, and when you do that, it’s like, we’re all here doing the same thing. I get that you’ve been doing it longer and your band is bigger than mine, but we all know how to handle ourselves. Just saying hello, buddy.

AllMusic: Do you think you're an easy band to tour manage?

Robertson: I think we are. Our tour manager might think differently. We’ve had the same tour manager for 12 or 13 years now, so even before we had a record deal, he was one of the guys pushing our gear and helping us drive to shows and load in and set up and everything. He was a high school friend of ours, so he might be able to deal with the stuff we do better than some other people. I think we’re generally easy to tour manage, all we ask is that we have cold drinks and ice on the bus, know where we’re going to be the next day, and that’s pretty much it.

AllMusic: You cover Edwin Starr's "War" on the record, how did you choose that one?

Robertson: This is no joke whatsoever, we had one of our original songs that we were going to record, and we were walking upstairs to go to record it, and a couple of guys were like, “I don’t know about this song, it’s cool, but I don’t know if it fits,” and so we said, “Hell, let’s do a cover, let’s record something different.” We thought that song would be a B-side anyways, so went in and were thinking about doing a Stevie Wonder song, we’re all big Motown fans, but then I went down the list of Motown Number Ones that I have on my phone, and “War” came on, and it was an immediate, “Hell yeah, that’s what we’ve got to do, that song works as well now as it did 40 years ago." So 10 minutes after listening to it, we’re up in the tracking room at the studio, recording this version of this song. It was 10 minutes of, “Are we going to do this song?” to “Yeah, we’re going to do it, let’s track it right now.”

AllMusic: You've done other covers here and there, I'm sure it's a great way to get attention from a Def Leppard or Lynyrd Skynyrd crowd.

Robertson: It depends on the tour. When we were out with Chickenfoot, it was going great, but there was something missing, so we started doing “Rocky Mountain Way,” which we’d done years before – and years before Godsmack did it – we were doing it in traditional Joe Walsh style, with the talkbox and big extended guitar solos and everything, and when we’d do that, we’d see the crowd come to life, because it was something familiar to them. In that sense, it definitely worked. Also, we played at the Download Festival in 2011, and we did “Rolling in the Deep,” the Adele song. We did it at a metal festival, and here we are, playing a song by Adele. It was amazing, the whole crowd started singing the chorus with me, and it was so cool to see something like that happen, to see that good music translates no matter what genre it is.

Kentucky is due out on April 1 and can be preordered on iTunes. Black Stone Cherry will be on the road relentlessly through August.

KONGOS on Breaking Through in America

KONGOS on Breaking Through in America