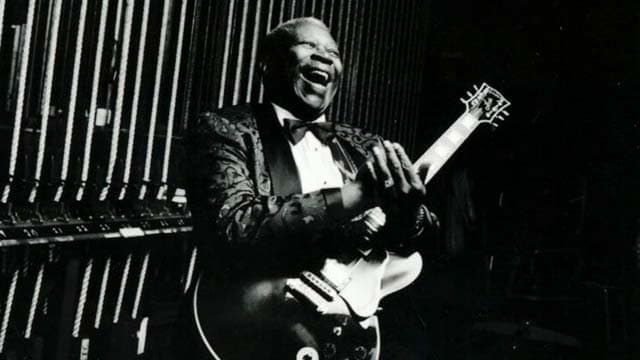 This article is adapted from the forthcoming Grove Atlantic biography, King of the Blues.

B.B. King released more than fifty proper albums in his lifetime, but many casual fans can name just one: Live at the Regal, from 1965, arguably the greatest live blues album. B.B. was probably the most important blues artist of the postwar era, crucial to the evolution of the guitar hero and the ascent of Eric Clapton, Carlos Santana, Billy Gibbons and most of their peers. But B.B. himself arose in the singles era, and he cut many of his best sides before the long-player had taken hold. (Many other ‘50s greats, from Little Richard to Ruth Brown, are likewise known more for singles than albums.)

The vagaries around B.B.'s album discography frustrate any fan from building a collection. Regal is a fine place to start. You might proceed to one of the superb single-volume B.B. King anthologies from Ace Records in Britain. But what then? A four-disc box set feels like overkill if you haven't heard even one B.B. King studio album in its entirety.

B.B.'s catalog is a mess. Many early discs are slapdash collections from Modern Records, the independent "race" label that, for better or worse, released most of the really essential B.B. King singles in the 1950s and 1960s. When B.B. moved to a major label, ABC-Paramount, he promptly sank into a morass of Sinatra-style strings, marooned for half a decade. His crossover to pop superstardom in the Woodstock era inspired a run of high-gloss albums that stands as his most consistent era. In the decades that followed, B.B. boldly explored a dozen different musical genres, from big band to funk to cocktail jazz to country. Most of those outings are forgotten. A few should be remembered.

Here is a list of six underappreciated B.B. King LPs that any serious fan should own. I have purposefully omitted a few fine but familiar releases, including the star-studded Indianola Mississippi Seeds, the Clapton collaboration Riding with the King and the valedictory One Kind Favor. And I have skipped Live at the Regal: If you're a serious fan, you already own it.

My Kind of Blues, 1960
B.B. called it his favorite album, and My Kind of Blues enjoys mythic stature among collectors. Hard facts on the release are few: B.B. reportedly cut it in a single day, amid a jumble of other recordings as he prepared to decamp from the Bihari brothers' Modern Records imprint to a major label. The Biharis had released at least nine previous long-players under B.B.'s name, but My Kind of Blues was one of the first to feature a set of songs recorded as an album, rather than singles and scraps. Alternately mellow and moody, My Kind of Blues pulses with the laid-back cadence of last call at a smoky club. B.B. leads a four-piece ensemble, probably the smallest group he had fronted at any session and a retreat from the big-band stylings of his prior recordings. Lucille opens the album with thirty seconds of unhurried, unaccompanied solo before B.B. wails, "Oh, baby, you done lost your good thing now." The full band doesn't kick in until the second minute, and it enters at a loping pace, exploring the aural space that the long-player era had spawned.

B.B. King, 1963
Utterly forgotten today, the eponymous B.B. King offered a cannon blast of blues, easily the most powerful set of songs B.B. had yet recorded for a studio LP. Most of the ten tracks were new and sounded like the product of a single session at the end of B.B.'s decade-long tenure with Modern Records. Producers set the volume on B.B.'s microphone so high that it crackles with distortion from the opening notes of the first song, "Going Home." From there, B.B. delivers one raw blues rant after another, raging over crisp, intricate horn charts from ace arranger Maxwell Davis. The backing band sounds barely contained. The Biharis pulled The Letter" and "You Never Know" as a single, both sides buoyed by B.B.'s impassioned baritone and impeccable guitar. B.B.'s powerful lungs burst from the speakers on "Sundown" and "You Shouldn't Have Left," demanding the listener's attention. The energy doesn't ease until the final notes of the closer, "Shake Yours." At this point in his career, B.B. King could have sung his grocery list and brought his fans to their feet.

Blues Is King, 1967
This incendiary live set makes a stark companion piece to Live at the Regal, released two years earlier. Regal is the famous one – but B.B. and his musicians didn't much like it. Producers had punched up the recording by padding B.B.'s backing band with second ensemble, the Regal house band, yielding a set of songs that sounded sloppy to the musicians who had performed them. Literally and figuratively, Blues Is King was everything Live at the Regal was not. Regal had presented B.B. with a big band in a large theater, playing his greatest hits. Blues Is King put him in a smaller club with a tight quintet, playing just one hit, Don't Answer the Door," and nine lesser-known but explosive tracks, one of them, "Night Life," penned by Willie Nelson. Where Live at the Regal celebrated love, Blues Is King stewed in anger and despair. Blues Is King was a breakup album, chronicling the demise of B.B.'s second marriage. It was almost a concept album, as cathartic as Shoot Out the Lights or a href="https://www.allmusic.com/album/rumours-mw0000193833">Rumours. On the opening track, "Waitin' on You," a man sits alone in his home at four o'clock in the morning, awaiting a woman who has stayed out too late. With the second song, "Gambler's Blues," his lady is gone. The third track, "Tired of Your Jive," finds our narrator angry and bitter. By the fifth track, "Buzz Me," he begs his woman to come home.

Completely Well, 1969
This is the album that features "The Thrill Is Gone," B.B.'s signature song. I include it on this list not because it's forgotten – it isn't – but because so many listeners give short shrift to all of B.B.'s studio recordings. Completely Well is the finest studio LP of B.B.'s crossover era, a series of albums and appearances that introduced him to millions of white rock and pop fans after nearly two decades on the chitlin' circuit. Producer Bill Szymczyk modernized B.B.'s sound by pairing him with a crack band of contemporary musicians in a studio outfitted with copious quantities of wine and weed. The sessions yielded a series of long, loose jams. The opener, "So Excited," ranks among B.B.'s most distinctive works. It begins, deceptively, with a straight-ahead rock beat before opening up into a funky, syncopated polyrhythm, anchored by an ear-candy riff from the organ and a confident vocal from B.B., who fed off the band just as he drew energy from an audience in concert. Side two offers a raucous reprise of B.B.'s 1955 single "Crying Won't Help You." The performance stretches into a six-minute jam and segues into "You're Mean," which combusts for another ten minutes, B.B. and second guitarist Hugh McCracken locked in musical duel. After a blistering exchange, the two guitarists pause, and spontaneous applause erupts in the studio. B.B. breaks up in laughter. No backing band had pushed him so hard.

Midnight Believer, 1978
B.B. explored new sounds with every release in the ‘70s and ‘80s. He hit a lot of dead ends. But he scored a timely comeback with Midnight Believer, collaborating with an established and exciting jazz-pop ensemble, the Crusaders. Joe Sample and lyricist Will Jennings delivered a stack of tracks that wed B.B.'s blues to the Crusaders' jazz-funk-pop formula. The opener, "When It All Comes Down (I'll Still Be Around)," offers a memorable melody set atop a song that is pure late-'70s pop but rooted in blues. The superb backing band leaves plenty of room for Lucille, whose deft interplay with the sidemen illustrates why B.B. was so beloved among fellow musicians. The title track is funk verging on disco, but B.B. remains in control. The album flirts with Hall & Oates–style soul on "

The Story of Bo Diddley

The Story of Bo Diddley