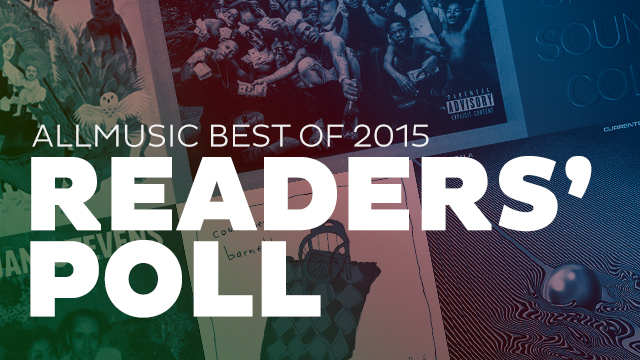 You've heard from our editors about their favorite albums of the year, and now it's time to close out our look back at 2015 with the results of our readers' poll. We took the albums with the highest average scores that received a sufficient number of overall ratings, put together the ballot, and you all took it from there. Read on to find out which albums mattered the most to the AllMusic audience in 2015.

"[T]his unfolds with the logic of a dream, details falling into a place so subtly they're felt, not heard....An impeccably arranged album beneath its soothing, sleepy surface, with every element assisting in an illusion of deep, shimmering, and alluring melancholy." — Stephen Thomas Erlewine

"It's a bright, openhearted call to arms, an antidote to The Woods, and a furious and cloistered record that found the band retreating whenever they decided to look on the outside world....The first and lasting impression of No Cities to Love is one of joy, a joy that emanates from a group who realized the purpose and pleasure of being in a band during their extended absence." — Stephen Thomas Erlewine

"Star Wars feels like an album full of experiments and happy accidents, 11 songs where the group members gathered in their rehearsal spot, rolled tape, and let their muse do what it will. Which is not to say Star Wars comes off as sloppy or uncertain; Jeff Tweedy's songs are a bit more angular than usual, but the melodies are typically strong and engaging (and often sweeter than their delivery suggests at first glance), and they give the performances a solid backbone." — Mark Deming

"They free themselves from the vestiges of the past, let loose, and push themselves further in either direction. This could've resulted in a disjointed record pulling itself in two opposing directions, but the mess of Sound & Color is invigorating, likely because the album uses its title as a creed. They play Southern soul-rock in an era where the past is indistinguishable from the present, and how the band interlaces the old and the new on Sound & Color feels startlingly fresh." — Stephen Thomas Erlewine

"Whether Tillman is maturing into the Father John Misty persona or vice versa is still up for debate, but there's no denying his growth as an artist, and I Love You, Honeybear [...] is as powerful a statement about love in the vacuous, social media-obsessed early 21st century as it is a denouement of the detached hipster charlatan." — James Christopher Monger

"In addition to the soft rock of the '70s feel that permeates the sound, [Kevin] Parker adds elements of R&B and hip-hop to the mix, gets lyrically introspective in spots, and generally sounds like he's either on the verge of a long nap or just waking up from one. These aren't bad things when done right, and Parker's prowess as a producer and musician makes most of Currents palatable, if not extremely exciting. However, by focusing on all these new elements, and by sleepwalking through at least half of the songs, this new way of doing things does a lot to frustrate the expectations of anyone looking to this album as another mind-blowing expression of guitar-heavy psych-pop." — Tim Sendra

"While there's deep and genuine love in Carrie & Lowell, there's also uncertainty, sadness, and brief but jagged bursts of anger; these songs speak of loss and heartache and the difficult push and pull of familial relationships, but they're also full of random memories, both pleasant and troubling, and they leap from reveries of family vacations faded by the passing of decades, to the immediate regrets of what was or wasn't said and done in the aftermath of death. Stevens has offered us some fine albums in the past, but he's never made anything quite like Carrie & Lowell." — Mark Deming

"Barnett might be part of a long line of underground rock troubadours but, as always, what matters is her specificity. Barnett's thick Australian accent carries an unstated pride for her homeland, but her sly twists of phrase, alternately wry and melancholic, give a greater sense of place, time, and character. Offhand observations mingle with understated insights, a nice trick of songwriting that the music cannily mirrors." — Stephen Thomas Erlewine

"Lamar is such a prodigiously talented and seductive artist that his wit, wisdom, and wordplay knock all these stray molecules into place. To Pimp a Butterfly is as dark, intense, complicated, and violent as Picasso's Guernica, and should hold the same importance for its genre and the same beauty for its intended audience." — David Jeffries