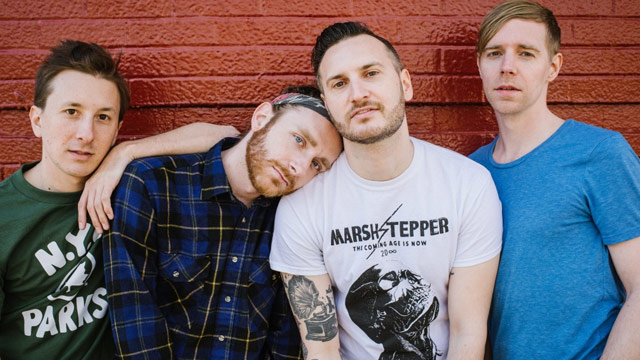 It's a busy summer for Brooklyn's Bear Hands, as the band celebrates its 10th anniversary, the release of their latest album, You'll Pay For This, and the band is currently on the road in the U.S. alongside Atlas Genius and the Moth & the Flame, with shows with Foals lined up for the fall.

We spoke with Bear Hands guitarist Ted Feldman about why he hopped into the co-producer's chair for You'll Pay For This and how it has affected his dynamic with the other band members, if audiences in other towns bristle at the idea of a "Brooklyn band," and the nerves that came with picking the five-minute "2AM" as the album's lead single.

AllMusic: "2AM" is the album's lead single, and also its longest track. Did the length cause any debate or does that not matter anymore?

Ted Feldman: That was certainly a surprise to me, I thought that would be more of a consideration, the track length, but our managers didn’t care as much. We made a slight edit for the radio that shaved off 30 seconds, but it’s still four and a half minutes, which is pretty long for the radio. We weren’t sure which one was the best choice for a single, which is either a really good thing or a really bad thing, not having that nailed down. We either had a lot of choices or no choices. It’s the longest song we’ve ever put out.

AllMusic: Were you nervous about that decision?

Feldman: It’s definitely a little adventure. We made the album without any consideration for that kind of thing. I like the album, but deciding which of the 12 feet to put forward first is a risky move. I like that it doesn’t feel like any sort of a pandering move, it’s long, it’s midtempo, it’s not what I would consider a conventional single. If people like that song, then I think they’ll like the record as a whole.

AllMusic: How do audiences in other areas react to you guys being a "Brooklyn band?" The term has become a bit of a pejorative in some places.

Feldman: We used to and still sometimes say that we’re from Brooklyn onstage. I don’t think we’ve ever gotten the eyeroll, but it’s a weird thing. I don’t think it really means anything, it’s like those radio shows, there’s such a variety of music that comes out of that place. In the last 10 years, every band was from Brooklyn, it doesn’t mean anything, and people are so annoyed by hearing about Brooklyn, I can understand why they might roll their eyes. But I don’t feel like it’s any sort of sonic identity, that’s just where we live.

We just played a show in Hartford, and the rest of my band grew up in Connecticut, and it was sponsored by the radio station they listened to growing up, and everyone was excited to find out that they were from Connecticut. It’s not like people from Brooklyn have hometown pride about our band, or any band. It’s a transient place, at least the way it’s been populated in the past 10, 20 years. It’s not homegrown acts, we’re not the Beastie Boys or whatever.

AllMusic: Your guitar style is very tailored to what the band does, you're adding accents and color more than you are riffing.

Feldman: I like a good riff as much as the next guy, but I think the way I write, we put the vocals at the center of things and shape sounds and parts around that. There’s a few guitar parts that come first, but maybe it’s my personality, I’ve never been a real attention-grabbing, wanky guitar player. Not a lot of solos, I’m more interested in making interesting sounds and complementary parts and beautiful lines. I like a good riff and a good melody. I think some of it is kind of catchy, but it’s not Sabbath, never has been, for me.

AllMusic: And how does that carry into your stage presence? I imagine you're not doing a lot of running around.

Feldman: I try to be as honest with myself and everyone as I can be, you’re not going to see my leg up on the monitor or thrusting with the guitar or anything. I’ve been performing in some capacity since I was a kid, so I’m fairly comfortable being onstage, but I’m also always critical of myself and how I look. I’m comfortable onstage, but then you see pictures and videos, and I’m not liking a lot of myself or my stage show, there’s room for improvement. We’ll see how it shakes out, maybe I’ll end up wearing some really flashy shit and jumping around and getting pyrotechnics and stuff.

AllMusic: What made you decide you wanted to get involved with the production side of making records?

Feldman: It’s something I’ve always been curious about. On the last record, we didn’t have a lot of resources or the drive, we were kind of falling apart, and if I wasn’t going to do it, if I wasn’t going to rally and make it happen, we just weren’t going to do it. So that’s sort of become my role, in the songwriting and arranging to the demoing process to being at the computer, at the helm, doing that kind of stuff. Then I was very lucky to have James Brown, who mixed our last couple of records, working directly with him on this one in production, and I learned a lot from him, and we brought different ideas and strengths to the table. He’s a lifelong engineer and producer, so he has more tricks up his sleeve. I felt compelled to take that role by circumstance.

AllMusic: With that added role, are you still able to be one of the guys or do you have to be a bit aloof?

Feldman: It’s a balance, you can’t change that we’re a group of four guys who have been a band for almost 10 years, and that dynamic is, in some ways, the same as it’s always been. Things have shifted a bit, but they’re my dudes, my buddies, and I’m not an outsider. It would be dishonest or weird to act that way. There are some unilateral decisions to be made, if they give me the space and the trust to take the helm at the computer or give me the time with James, I’m going to take it and use it.

AllMusic: Have you ever pretended to like a band just to fit in with people?

Feldman: There’s some things that are supposed to be cool or great that I just never got into. I more found that I was really anti-bands that people liked, then I came around to liking them. I was real contrarian. I never really got into Tom Petty, everyone’s always telling me I should love Tom Petty and really rethink it, and I rethink it once in a while, but it’s not for me. Some things are just embarrassing from high school, like I had that narrow taste, and I’d have arguments with a friend in college who was obsessed with Talking Heads, and I like Talking Heads, but he liked them too much, so I’d get under his skin and tell him that I didn’t like them. But I love the Talking Heads.

AllMusic: When you're producing, do you end up having music-related dreams?

Feldman: When I’m on tour, I dream about the interactions I’ve been having and the people I’m on tour with. Then when we were making this record, it was nonstop, I was editing waveforms in my brain in my sleep, EQing guitar tones in my sleep. That’s probably not healthy. We got pretty obsessive when we were writing, and that can be productive. But in the recording process, you should probably take a rest and take your mind off it for a second.