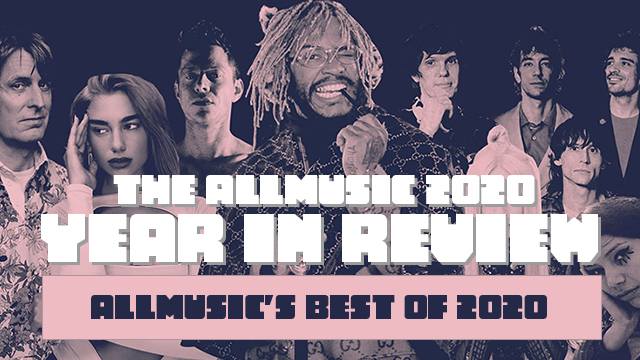 While the world may have ground to a halt in 2020, the music kept coming when we needed it most. We're excited to share our lists of our favorite albums of the year, beginning with our overall list of the year's 100 best albums, and then going deeper into rock, pop, jazz, hip-hop, electronic, folk, and many more styles in our year-end roundup.

• In a year unlike any other, music played a bigger role than ever as a way to help confront, process, or simply drown out the tumult of our times. Perfume Genius and Dua Lipa had us dancing in our homes, Thundercat and Angelica Garcia reached new highs, and long-running acts like the Strokes and Stephen Malkmus reminded us that rock isn't dead. These are our 100 favorite albums of 2020.

• Whether you're looking to be soothed by the gentle ambient sounds of Mary Lattimore and KMRU, to be pummeled by the jagged chaos of RXM Reality and Prolaps, or hunting for a happy medium somewhere in between, the year's best electronic albums offered a wide range of sounds for every mood.

• Traditional sounds and experimental energy were on display in equal measure in our favorite folk albums of 2020, highlighted by standout records from Bill Fay, the Haden Triplets, Kaki King, and James Elkington.

• This year's vibrant Super Bowl halftime show beamed the Latin pop explosion into millions of living rooms, but artists like Prince Royce, Anuel AA, and La Dame Blanche didn't need a soda-sponsored stage to make their impact on music. Add in stellar records from Peruvian, Haitian, Nigerian, and South Korean artists, and you can do your own musical globe-trotting in a year when we couldn't get new stamps in our passports.

• A harsh year called for harsh sounds, and bands like Pallbearer, Napalm Death, Boris, and a reunited Mr. Bungle delivered by providing us with the best metal albums of 2020.

• Superstars like Taylor Swift, Selena Gomez, Lady Gaga, and BTS continued to rule the pop landscape in 2020, while Hayley Williams' deeply personal solo debut, Kylie Minogue's blissful return to the dancefloor, and the vital first LP from Beabadoobee all brought welcome flavors to a year that desperately needed them.

• Our editors each picked their favorite albums of the year in our AllMusic Loves 2020 roundup.

• The year's best Americana albums also carry the flavors of styles such as alt-country, rock & roll, soul, and bluegrass, but still retain the roots that keep them in the lineage of American musical traditions.

• Ambitious new records from the Strokes, the Rentals, Low Cut Connie, and Protomartyr earned spots on our list of the year's best rock albums, alongside standout comeback releases from Hum, X, and Ultimate Fakebook.

• Our look at the year's best R&B albums features a pair of LPs from Sault, the solo debut from Sault member Cleo Sol, Teyana Taylor's standout The Album, and records from familiar artists like Childish Gambino, the Weeknd, Brandy, and K. Michelle.

• The year's best archival releases were more than just the greatest hits of the greatest hits: enormous deluxe reissues from Prince and Tom Petty recontextualized the narratives of their original albums, collections of early works by Joni Mitchell and producer Clams Casino shed light on their geneses, and anthologies explored the Danish underground, British pop and blues, and pub rock scenes.

• It was impossible to not feel the blues in 2020, and while guitar sales soared this year, it's best to leave the blues to the professionals. Our favorite blues albums of 2020 included Shemekia Copeland's exploration of America's divisions on Uncivil War, Sonny Landreth's restless Blacktop Run, and the funky flair of Fantastic Negrito's Have You Lost Your Mind Yet?

• The worlds of indie pop & indie rock continued to expand and evolve in 2020, with highlights including the second album from Phoebe Bridgers, No Joy's genre-hopping Motherhood, and the calculated contradictions of Soccer Mommy's color theory.

• There was no shortage of high-quality jazz in 2020: the Webber/Morris Big Band and Gregg August both tackled how big band music can sound in 2020, while Mary Halvorson, Joel Harrison, Kurt Rosenwinkel, and Hedvig Mollestad Thomassen continued to push the boundaries of jazz guitar, and hip-hop influences added an extra spice to standout albums from Kassa Overall, Takuya Kuroda, and Archie Shepp.

• Our picks for the year's best rap and hip-hop albums include artists who left us too soon (Mac Miller, Juice WRLD, Pop Smoke), some who are making a comeback (The Streets, Quakers), and some who are just getting started (NLE Choppa, Headie One, REASON).