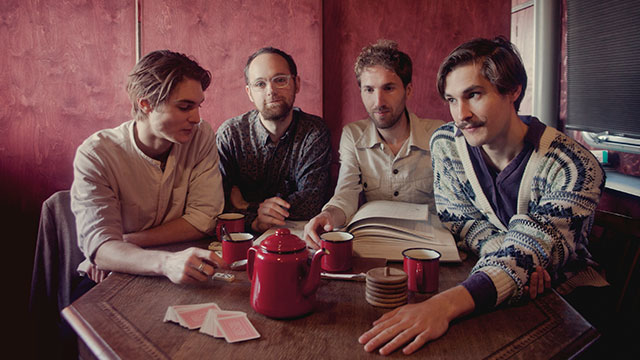 This week, we're excited to offer an exclusive stream with ties to our latest AllMusic Loves list! As Loves looks back at its favorite artists and albums associated with the 4AD Records label, we forge ahead with new sounds from folky English pop purveyors Stornoway. Earlier this year the band released Tales from Terra Firma on 4AD, which James Christopher Monger called a "sweet, soulful, and surprisingly epic-sounding" outing that "owe(s) as much to The Incredible String Band as they do a less cynical Belle and Sebastian," and now they're back with You Don't Know Anything. An EP composed of songs that didn't make sense on Terra Firma but deserved their own showcase, You Don't Know Anything "goes even further in charting the Oxford-based quartet's journey from doe-eyed romantics to unpredictable, quirk-pop spell-casters". A couple of our faves here are the kaleidoscopic "When You Touch Down from Outer Space" and the breezy title track, but all in all the EP is packed with "instantly gratifying moments of pop acumen".

Looking ahead, check out the video for upcoming single from You Don't Know Anything, "Farewell Appalachia":