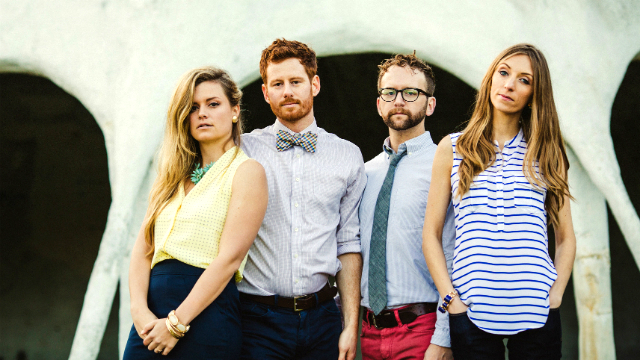 Earlier today we shared Eric & Magill's Night Singers, which you can hear in its entirety exclusively at AllMusic this week, but we're not done yet. We're also excited to offer Summer Winter, the first album by California-based indie poppers Fialta!

Named after a character from a Vladimir Nabokov short story, Fialta is the pairing of couples Michael Leibovich and Beth Clements along with David Provenzano and Sarah Shotwell, whose sound is fittingly bookish and romantic. Taking turns on vocal duties as well as instrumentation, AllMusic editor James Christopher Monger says Fialta whips up "cleverly arranged, erudite pop confections with lots of handclaps, glockenspiel, and ukulele, all of which are peppered with crystalline harmonies" with a sound that "handles the precarious spinning plates of suburban folk, self aware indie pop and local musical theater". In other words, it's a great soundtrack for a day at the beach, a long drive in the afternoon, or an evening spent holding hands and watching the sun set.

Summer like it's 1963 with the "Summer Winter" music video:
https://www.youtube.com/watch?&v=Hbrq_BOmGxE