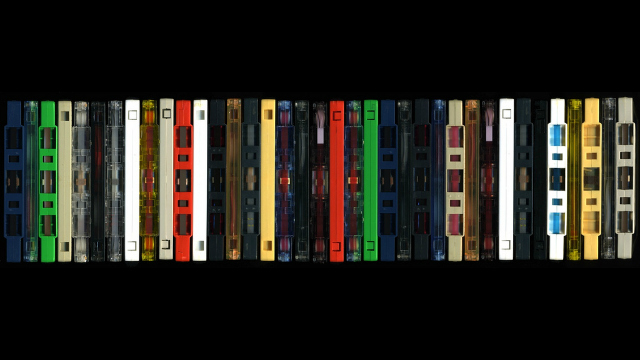 In 2012, when most people think about cassettes it's usually not in direct correlation with any kind of music. Retro-signifier, sure. Questionable tattoo choice; sometimes. Depending on your age, some typical responses to the importance of cassette tapes are "Do they even still make those?" or "I got rid of all mine years ago!" or maybe most often "What is that?".

However silly or seemingly antiquated it may be to some, the lineage of cassettes, while always existing in the margins, is ongoing. From the early '80s file-sharing prototype of home taping to Deadheads and punk collectors alike trading tapes of soundboard recordings from shows or rare demos, from the spray-painted limited editions that make up the foundations of the noise scene to lines around the block of DJ Screw's Houston TX storefront whenever he released a new mix tape. Though fragmented and microscopically obscure, entire movements of progressive sound have thrived on tapes as the sole distribution of their work. The ripples of cassette culture, and the importance of the relatively voiceless musics they house are yet to be fully felt.

I'm starting this column, All Tape Guide, as a way to explore the modern day landscapes of the micro-scenes associated with tape-only releases. Keeping with the somewhat un-documentable nature of the subject, these explorations could take the form of reviews, profiles, interviews with musicians or label owners or even random commentary.

To start as in-the-now as possible, lets begin with a spotlight on Chicago tape label Teen River. Opening for business on December 3rd of 2011 with an astounding initial batch of 32 releases, the Teen River crew have gotten more sounds out in their first two months than some labels do in their first few years. What's more, the label shows no signs of slowing, with a schedule of 40 new tapes planned for February. I attempted an e-mail interview with the anonymous label heads as to the motivations behind their hyper-prolific output and where they find their roster, but only got the words "GROW TIL YOU DIE" as an answer to most of my questions. I'm not sure where they found acts like Mole People or Big Sandwich, and while there seems to be no reason, rhyme or even point of origin for half of these tapes, amazingly most of the ones I've heard are at least interesting in some otherworldly way. American Landscape Painting brings a soothing found-sound collage of minimal electronic textures and acoustic instrumentation that would sound at home on Mego or Type. A mini-album by Gordon sounds like a far more subdued Panda Bear (if that's imaginable) and the more musically inclined acts on Teen River definitely pick up on a post-Panda/post-bedroom sample-damaged pop palate. Then again, the straight downtown punk of Wimps and pure noise of Headless Horse Head break up any chances of sonic typecasting. A tape by Geological Creep seems to be a field recording of shitty karaoke in a crowded bar. Seems like literally anything goes over at Teen River headquarters.

Integrating an internet presence into the grassroots format of tape-only jams has helped get this family of weird sounds circulating across the country and overseas. Their tumblr includes a discography as well as the usual multi-colored seizure-inducing art we've come to associate with conceptual tape imprints who have tumblrs. A more meat-and-potatoes sampling of the wares is available on a soundcloud page with excerpts from 21 of their growing number of releases. How long they can keep up this stride is uncertain, but with there's a lot to be said for strong starts. Contact the shadowy figures at Teen River with questions or comments here: teenrivertapes@hotmail.com.