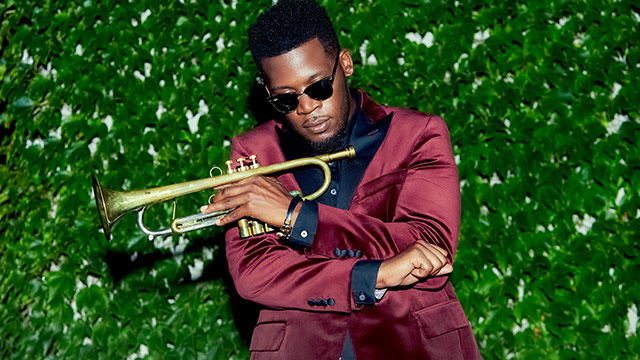 Jazz musician Keyon Harrold has become the go-to trumpeter when Jay-Z, Beyoncé, Maxwell and others need a hand, and was the pick when Don Cheadle needed to conjure up the sound of Miles Davis for the Grammy-winning Miles Ahead soundtrack. On his new album, The Mugician, Harrold returns to his own music, and brings a few of his friends and past collaborators, including Gary Clark, Jr., Big K.R.I.T. and Bilal, along for an vibrant and wide-reaching set of tunes, which sometimes arrive in grand, sweeping arrangements ("MB Lament," "Wayfaring Traveler") or in jagged, concise snippets ("Lullaby"). And while Harrold and his playing rightfully take center stage, the Ferguson-born artist also makes room for a number of vocal contributors, some of which directly comment on the uncertainty of the moment ("Broken News," "When Will It Stop?"), offering strength and courage in upsetting times. The Mugician is out September 29 on Legacy Recordings/Mass Appeal Records.

The Mugician can be ordered via iTunes and Amazon.