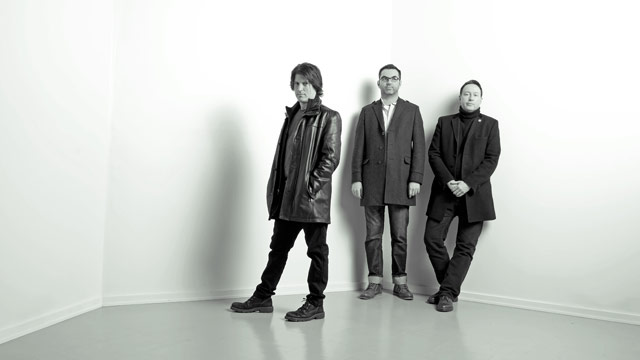 ​Long-running New Jersey shoegaze band deardarkhead gives us an exclusive first listen, plus a track-by-track rundown of their new EP, Strange Weather. Now an instrumental act, the band delivers six new tracks of propulsive, psychedelic rock, with plenty of big, ringing guitars and driving drums. So press play, then scroll down for commentary from drummer Robert Weiss. Strange Weather is due out March 25 on Saint Marie Records.

When our vocalist/bassist, Michael Amper, left at the end of 2009, Kevin Harrington (guitars) and myself were unsure about the future of the band. Although we had been seeking the right person to replace Mike, we had no luck finding anyone that could hold a candle to him, let alone make it to the audition. By the fall of 2010, Kevin McCauley had joined as our new bass player and we were determined to move forward as an instrumental, three piece. We’ve always done instrumentals in the past, but the lack of a vocalist is a constraint that has forced us to work harder in order to make things interesting. The guitar has to do all the heavy lifting melodically and I think the songs have become more complex because of that. Ultimately we try and write songs that we find entertaining, so we like to change it up from song to song.

The great thing about instrumental music is that you can decide what the songs mean to you as the vibe is the crucial thing. Usually when we write, one of us will create a rough Garageband demo and present it to the rest of the band. After that we all work on the song together, exploring ideas, adding new parts and finalizing an arrangement. The finished song is an evolution of the initial concept and it’s a collaborative, creative process. The end result is often very different from where we started. You can hear some of the demo work at our SoundCloud page.

This track started off as demo that Mr. Harrington created. He typically records many different lead sections and subtle variations on a theme, which he then refines down to his final parts. This one immediately felt like the opener for the EP, with the long and building guitar intro. We ran that part through a filter effect and added in some further atmosphere using more effects on a whistling tube that you twirl around at different speeds to create different pitches. The driving rhythm of the song, coupled with all the different section changes, creates a trippy, disorienting, dynamic tension. When we play it live I imagine the floor giving way and everything falling upward.

"Sunshine Through the Rain"

The title of this song is named after a segment from Akira Kurosawa’s movie Dreams. It’s a bit like a dark fairytale. There is an old legend in Japan that states that when the sun is shining through the rain, the kitsune (foxes) have their weddings. They do not like humans observing their ceremony. I felt the dreamy Cocteau Twins-esque quality of the chords worked well with the imagery from the film, which ends unresolved, on a somewhat sinister note. This is one of the first songs we did after going all instrumental. The guitar leads in the middle make me think of a Bond song for some reason.

"Juxta Mare" is Latin for “by the sea.” I’ve always lived by the Atlantic Ocean and it has been an underlying influence on me since I can remember. It’s expansive, dark and mysterious. We’ve often used underwater imagery in the past and this song is no different. Mr. Harrington plays a 12 string on this track and I especially love the long leads that he plays during the middle of the song, which propels everything towards the climax. It has a bit of a Cure/Echo and the Bunnymen feel to me. It came out a lot more hard driving than I had imagined. I picture being in a small boat that’s tossed about by crashing waves, narrowly avoiding being dashed on the rocks.

I’m huge fan of Lewis Carroll’s Alice’s Adventures in Wonderland and I’ve always been intrigued by the phrase “mad as a March hare”.

"A long-held view is that the hare will behave strangely and excitedly throughout its breeding season, which in Europe is the month of March (but which in fact extends over several months beyond March). This odd behavior includes boxing at other hares, jumping vertically for seemingly no reason and generally displaying abnormal behavior.”

Something about the pounding drum beat suggested marching or perhaps hopping wildly out of control, hence March Hares. It’s a bit unrelenting and somewhat anthemic in tone. The main part of the song is basically a blues progression, but with the guitar played in a droning, psychedelic, sitar-like manner it takes on a very different feel.

Not necessarily about a geological period of long-term reduction in the temperature of the Earth’s surface and atmosphere, but more of a personal cooling down. As one gets older, and hopefully wiser, the passion of youth settles down a bit. Things change, but that doesn’t mean you have to go quietly. I think that’s what it’s all about. The melodic bass line Mr. McCauley plays is a big part of the song. When we were demoing this, we kept adding more and more guitar leads toll the song just grew. It definitely has a dramatic, sense of urgency.

Much like Falling Upward, this one automatically sounded like the closing track. Mr.Harrington worked tirelessly on this one, arranging and rearranging things till I was totally confused. There was a method to his madness though and I’m glad he persisted, as this is one of my favorite tracks. Going into the studio I was a bit nervous on this one, but I think it came out beautifully. It sounds shimmering, expansive and perhaps a bit nostalgic. It makes for great driving and sounds like classic DDH to me.