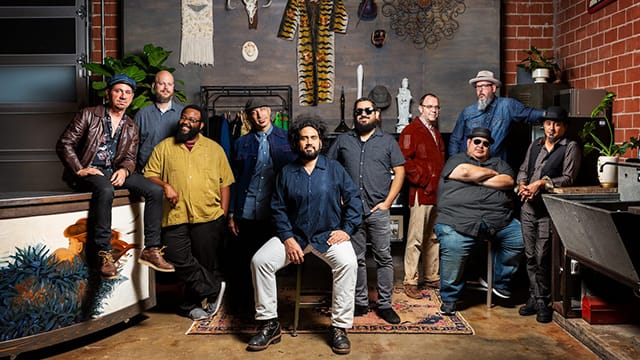 After putting their unique spin on the Black Sabbath oeuvre and Public Enemy's Fear of a Black Planet, Austin-based Latin funk and rock band Brownout is back with a set of new original tunes on Berlin Sessions. It's also the band's first original album with vocalist Alex Marrero, making the album unique among the band's mostly-instrumental back catalog.

Recorded just south of Austin during a sweltering Texas summer, Berlin Sessions came together under the watchful eye of producer and Los Lobos member Steve Berlin, for whom the album was named. Uptempo workouts like the succinct "Fill My Cup" and "Brownie" sit comfortably alongside more exploratory tracks including "Seamus" and the Morricone-inspired, soundtrack-ready closer, "After November." Berlin Sessions is due out March 6 on Fat Beats Records, and is available for preorder.