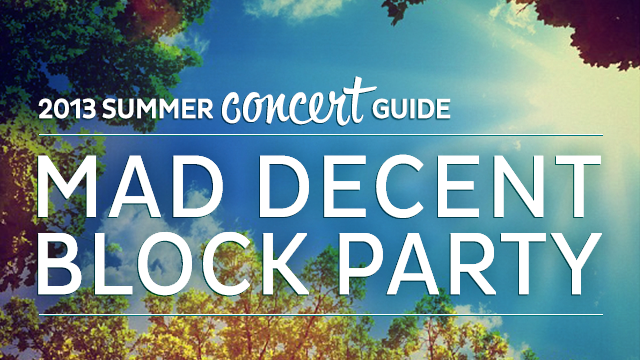 Five years strong and my how's it grown, the Mad Decent Block Party hits the road again this summer, landing in 13 cities with its weird and wild brand of party time. Check your local listings, as not every artist will be hitting every city, but this year's marquee acts include Diplo and his Major Lazer project along with "Harlem Shake" producer Baauer and Mexican electro hitmakers 3BallMTY who topped Billboard's Latin Song chart with the club cut "Inténtalo". The notorious party rapper Riff Raff is here as well, Canada's dubstep heroes Zeds Dead are sure to drop some serious bass, and when it comes to chefs that rap and who look like wrestlers, you can't do much better than rising star Action Bronson. With moombahton DJ Dillon Francis and trap DJ Flosstradamus on the bill, hips will be shaking to some banging electro, plus jam band Big Gigantic bring the improv and interaction, playing the "Livetronica" sound they helped pioneer.

Various locations in the US and Canada. July 19-September 15. More info: maddecentblockparty.com