They never had anything approaching a hit record, broke up before their debut album was released, and were all but unknown outside of New England. But if the Remains were widely overlooked during their mid-'60s run, years later they would be celebrated by fans of '60s garage rock as one of the greatest American bands of their era. The Remains were clearly inspired by the same tough British Invasion sounds that informed most garage acts of the day, but their formula included a much larger dose of vintage blues and R&B, and their attack was strong and taut. The records they left behind were confident and mature, and their live shows are still discussed in awestruck tones by rock fans who witnessed them at their peak.

The Remains (sometimes billed as Barry & the Remains) were formed in Boston, Massachusetts in 1964. All four members were attending Boston University, and met while they were living in the same dormitory. Guitarist and lead vocalist Barry Tashian and electric piano player Bill Briggs originally hailed from Westport, Connecticut, while bassist Vern Miller grew up in Livingston, New Jersey and drummer Chip Damiani called Wolcott, Connecticut home. The four young men found they shared similar tastes in hard-edged rock & roll and R&B, and began playing regularly at off-campus bars frequented by BU students. As Tashian and Miller began adding strong original material to their sets, the Remains became a sensation in Boston, and word spread to Epic Records, who signed the guys to a record deal. The group was sent to Nashville to record with producer Billy Sherrill, who inexplicably picked two uncharacteristically downbeat numbers, "I Can't Get Away from You" and "But I Ain't Got You," for their debut single in 1965. Epic chose more wisely for the Remains' second 45 with the swaggering "Why Do I Cry" (backed with "My Babe"), but the record failed to make a dent outside New England, and two more singles issued in 1965, "Talkin' About You" and "Diddy Wah Diddy," didn't change their losing streak. 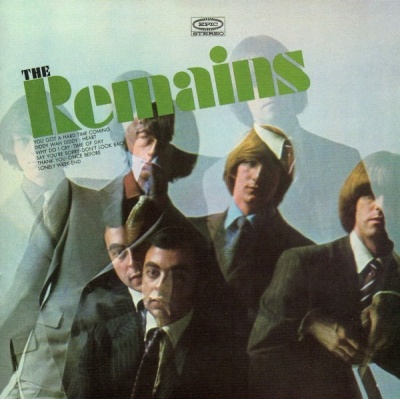 The Remains looked to have a big year in 1966. Epic released the song "Don't Look Back" as a single, and it was the most exciting number the band had released to date. The group appeared on several major television shows, including The Ed Sullivan Show and Hullabaloo. Capitol Records expressed an interest in the Remains, and had them cut a live-in-the-studio demo in hopes of capturing the magic that hadn't always come through on the Epic releases. And the Remains landed the gig of a lifetime, an opening slot on the Beatles' 1966 American tour. However, very little went as expected; "Don't Look Back" failed to scale the singles charts, Capitol passed on the group, and shortly before the Beatles' tour, Chip Damiani quit the band. The Remains quickly recruited a new drummer, N.D. Smart, and they received positive notices for their shows with the Beatles. But the band grew dispirited on the road, and though Smart was a solid drummer, they missed the feel of Damiani's work, and shortly before the release of the album The Remains in September 1966, the band called it a day.

Barry Tashian relocated to Nashville, and was part of Emmylou Harris' band in the '70s and '80s, as well as recording several duo albums with his wife, Holly Tashian. Vern Miller was a member of Swallow, who cut two albums for Warner Bros. in the early '70s, and later went on to a career as a music teacher. Bill Briggs opened an auto dealership, while Chip Damiani ran a construction company. And N.D. Smart played with the groups Kangaroo, Mountain, Gram Parsons & the Fallen Angels, and Great Speckled Bird. In 1969, the Remains played a one-off reunion show, and a recording of the performance was issued in 2018 as Live 1969. In 1972, Lenny Kaye included "Don't Look Back" on his pioneering garage rock anthology Nuggets: Original Artyfacts from the First Psychedelic Era 1965-1968, which led to a rediscovery of the band among fans of mid-'60s rock. In 1991, Epic/Legacy issued a comprehensive CD collection of the band's recordings, Barry & the Remains, and in 1996 the Capitol Records demo finally received an authorized release under the title A Session with the Remains. In 1998, the original lineup of the Remains played their first show since 1969 at the Cavestomp Festival in New York City, and the group continued to play sporadic live shows and even cut a new album, Movin' On, in 2002. On February 23, 2014, Chip Damiani died after suffering a cerebral hemorrhage.