If the blues has a truly mythic figure, one whose story hangs over the music the way Charlie Parker's does over jazz or Hank Williams' does over country, it's Robert Johnson, certainly the most celebrated figure in the history of the blues. Of course, his legend is immensely fortified by the fact that Johnson also left behind a small legacy of recordings that are considered the emotional apex of the music itself. These recordings have not only entered the realm of blues standards ("Love in Vain," "Crossroads," "Sweet Home Chicago," "Stop Breaking Down"), but were adapted by rock & roll artists as diverse as the Rolling Stones, Steve Miller, Led Zeppelin, and Eric Clapton. As a singer, composer, and guitarist of considerable skills, Johnson produced some of the genre's best music and the ultimate blues legend. Doomed, haunted, driven by demons, a tormented genius dead at an early age -- all of these add up to making him a character of mythology who -- if he hadn't actually existed -- would have to be created by some biographer's overactive romantic imagination.

The legend of his life -- which even folks who don't know anything about the blues can cite chapter and verse -- goes something like this: Robert Johnson was a young Black man living on a plantation in rural Mississippi. Branded with a burning desire to become a great blues musician, he was instructed to take his guitar to a crossroads near Dockery's plantation at midnight. There he was met by the Devil, who took the guitar from Johnson, tuned it, and handed it back to him. In less than a year's time, in exchange for his everlasting soul, Robert Johnson became the king of the Delta blues singers, able to play, sing, and create the greatest blues anyone had ever heard.

As success came with live performances and phonograph recordings, Johnson remained tormented, constantly haunted by nightmares of hellhounds on his trail, his pain and mental anguish finding release only in the writing and performing of his music. Just as he was to be brought to Carnegie Hall to perform in John Hammond's first Spirituals to Swing concert, the news had come from Mississippi; Robert Johnson was dead, poisoned by a jealous girlfriend while playing a jook joint. Those who were there swear he was last seen alive foaming at the mouth, crawling around on all fours, hissing and snapping at onlookers like a mad dog. His dying words (either spoken or written on a piece of scrap paper) were, "I pray that my redeemer will come and take me from my grave." He was buried in a pine box in an unmarked grave, his deal with the Devil at an end.

Of course, Johnson's influences in the real world were far more disparate than the legend suggests, no matter how many times it's been retold or embellished. As a teenage plantation worker, Johnson fooled with a harmonica a little bit, but seemingly had no major musical skills to speak of. Every attempt to sit in with local titans of the stature of Son House, Charley Patton, Willie Brown, and others brought howls of derision from the older bluesmen. Son House: "We'd all play for the Saturday night balls, and there'd be this little boy hanging around. That was Robert Johnson. He blew a harmonica then, and he was pretty good at that, but he wanted to play a guitar. He'd sit at our feet and play during the breaks and such another racket you'd never heard." He married young and left Robinsonville, wandering the Delta and using Hazelhurst as base, determined to become a full-time professional musician after his first wife died during childbirth. Johnson returned to Robinsonville a few years later and he encountered House and Willie Brown at a juke joint in Banks, Mississippi; according to House, "When he finished all our mouths were standing open. I said, 'Well, ain't that fast! He's gone now!'" To a man, there was only one explanation as to how Johnson had gotten that good, that fast; he had sold his soul to the Devil.

But Johnson's skills were acquired in a far more conventional manner, born more of a concentrated Christian work ethic than a Faustian bargain with old Scratch. He idolized the Delta recording star Lonnie Johnson -- sometimes introducing himself to newcomers as "Robert Lonnie, one of the Johnson brothers" -- and the music of Scrapper Blackwell, Skip James, and Kokomo Arnold were all inspirational elements that he drew his unique style from. His slide style certainly came from hours of watching local stars like Charley Patton and Son House, among others. Perhaps the biggest influence, however, came from an unrecorded bluesman named Ike Zinneman. We'll never really know what Zinneman's music sounded like (we do know from various reports that he liked to practice late at night in the local graveyard, sitting on tombstones while he strummed away), or how much of his personal muse he imparted to Johnson, if any. What is known is that after a year or so under Zinneman's tutelage, Johnson returned with an encyclopedic knowledge of his instrument, an ability to sing and play in a multiplicity of styles, and a very carefully worked-out approach to song construction, keeping his original lyrics with him in a personal digest. As an itinerant musician playing at country suppers as well as on the street, his audience demanded someone who could play and sing everything from blues pieces to the pop and hillbilly tunes of the day. Johnson's talents could cover all of that and more. His most enduring contribution, the boogie bassline played on the bottom strings of the guitar (adapted from piano players), has become part-and-parcel of the sound most people associate with down-home blues. It is a sound so very much of a part of the music's fabric that the listener cannot imagine the styles of Jimmy Reed, Elmore James, Eddie Taylor, Lightnin' Slim, Hound Dog Taylor, or a hundred lesser lights existing without that essential component part. As his playing partner Johnny Shines put it, "Some of the things that Robert did with the guitar affected the way everybody played. He'd do rundowns and turnbacks. He'd do repeats. None of this was being done. In the early '30s, boogie on the guitar was rare, something to be heard. Because of Robert, people learned to complement theirselves, carrying their own bass as their own lead with this one instrument." While his music can certainly be put in context as part of a definable tradition, what he did with it and where he took it was another matter entirely.

Although Robert Johnson never recorded near as much as Lonnie Johnson, Charley Patton, or Blind Lemon Jefferson, he certainly traveled more than all of them put together. After his first recordings came out and "Terraplane Blues" became his signature tune (a so-called "race" record selling over three or four-thousand copies back in the early to mid-'30s was considered a hit), Johnson hit the road, playing anywhere and everywhere he could. Instilled with a seemingly unquenchable desire to experience new places and things, his wandering nature took him up and down the Delta and as far afield as St. Louis, Chicago, and Detroit (where he performed over the radio on the Elder Moten Hour), places Son House and Charley Patton had only seen in the movies, if that. But the end came at a Saturday night dance at a juke joint in Three Forks, Mississippi, in August of 1938. Playing with Honeyboy Edwards and Sonny Boy Williamson (Rice Miller), Johnson was given a jug of moonshine whiskey laced with either poison or lye, presumably by the husband of a woman the singer had made advances toward. He continued playing into the night until he was too sick to continue and then brought back to a boarding house in Greenwood, some 15 miles away. He lay sick for several days, successfully sweating the poison out of his system, but caught pneumonia as a result and died on August 16. The legend was just beginning. 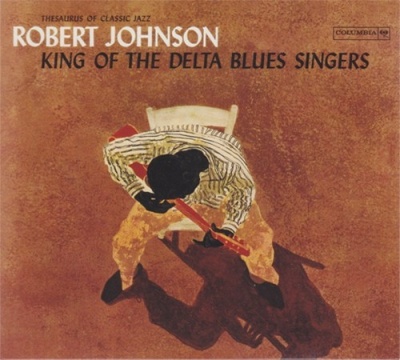 In the mid-'60s, Columbia Records released King of the Delta Blues Singers, the first compilation of Johnson's music and one of the earliest collections of pure country-blues. Rife with liner notes full of romantic speculation, there was little in the way of hard information and a painting standing in for a picture, this for years was the world's sole introduction to the music and the legend, doing much to promote both. A second volume -- collecting other master takes and a few of the alternates -- was released in the '70s, giving fans a first-hand listen to music that had been only circulated on bootleg tapes and albums or cover versions by English rock stars. Finally in 1990 -- after years of litigation -- a complete two-CD box set was released with every scrap of Johnson material known to exist, plus the holy grail of the blues: the publishing of the only two known photographs of the man himself. Columbia's parent company, Sony, was hoping that sales would maybe hit 20,000. The box set went on to sell over a million units, the first blues recordings ever to do so.

In the intervening years since the release of the box set, Johnson's name and likeness has become a cottage growth merchandising industry. Posters, postcards, T-shirts, guitar picks, strings, straps, and polishing cloths -- all bearing either his likeness or signature (taken from his second marriage certificate) -- have become available, making him the ultimate blues commodity, with his image being reproduced for profit far more than any contemporary bluesman dead or alive. Although the man himself (and his contemporaries) could never have imagined it in a million years, the music and the legend both live on.