You're Driving Me Crazy Review

Van Morrison's late career tear continues with You're Driving Me Crazy, his third album in seven months. Following the formula of 2017's Roll with the Punches and Versatile -- each offered jazz, blues and R&B standards and redone originals -- this set offers eight tracks from Morrison's catalog and seven standards. it stands on its own, however, as a collaborative encounter with jazz organist and trumpeter Joey DeFrancesco's hip quartet. They all holed up in a Sausalito studio and completed the recording in only two days, capturing everything in a take or two.

The loose feel is deceptive as the playing is anchored deep in the pocket; it crackles with live-wire intensity. Cole Porter's "Miss Otis Regrets" is framed by a gentle swing, with DeFrancesco's organ and Troy Roberts' smoky tenor saxophone introducing Morrison. Though he sings in a lower register now, his voice has lost none of its suppleness. He hovers, glides, and swoops through the lyrics; his vocal is akin to another horn, thus making DeFrancesco's trumpet solo a virtual duet. The jump swing of "All Saints Day" sounds like Jimmy McGriff jamming with Louis Jordan and James Moody. The new version of "The Way Young Lovers Do," from Astral Weeks, offers a lilting, Coltrane-esque soprano saxophone, modal changes, souled-out scatting, and minor swing, revealing just how prescient and timeless the song remains. Johnny Mercer's "Travelin' Light" is a sweet, sultry blues with muted trumpet, shimmering chords, and Morrison's improvisations on the changes. The band stretches out on "Goldfish Bowl." Morrison's fingerpopping delivery touches on everyone from Ray Charles to Jimmy Witherspoon; what's more, he adds his alto horn for a twin saxophone attack as DeFrancesco's tight B-3 solo is appended by guitarist Dan Wilson's stinging, fleet-fingered break. No tune here signifies the collective musical mind meld like the title track by Walter Donaldson. It finds Morrison laughing with delight during the instrumental breaks and outro as the band swings and struts. "Everyday I Have the Blues," with twinned saxes, bassline-heavy B-3, and popping snares becomes the perfect jump jam. The uptempo read of "Have I Told You Lately That I Love You" marks the latter (and best) of two duets between Morrison and daughter Shana (the other is Eddie "Cleanhead" Vinson's hard bopping "Hold It Right There"). Its three-saxophone head and sumptuous, soul-drenched organ fills surround the pair's empathic singing. The funky Titus Turner-penned "Sticks and Stones" offers dazzling electric piano pumping from DeFrancesco, bell-like cymbals from Wilson, and Morrison straddling of the worlds of R&B, jazz, and blues. Closer "Celtic Swing" is the lone instrumental, a stellar showcase for Morrison's own alto playing and Wilson's arpeggio-rich soloing with DeFrancesco keeping the breezy groove even when he embellishes it during his solo. You're Driving Me Crazy is as energetic as any live show. Of the three successive recordings done in this way, this one stands head and shoulders above for its inspired performances and choices of material. 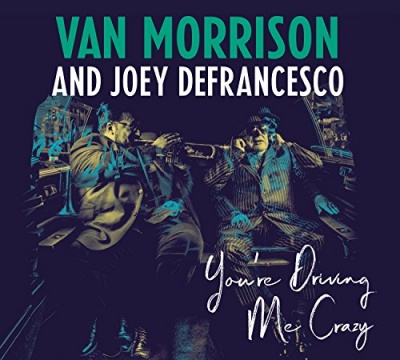 You're Driving Me Crazy Album Information