You Can Tune a Piano, But You Can't Tuna Fish Review

You Can Tune a Piano, But You Can't Tuna Fish was a breakthrough album for REO Speedwagon in a sense, gelling the guitar craft of Gary Richrath and the vocals of Kevin Cronin with songs that rambled and rolled and never stopped for air. Richrath's style finally formed some catchy hooks, and Cronin's songwriting is solid, while his voice sounds rejuvenated and downright fiery. "Roll with the Changes" and "Time for Me to Fly" only made it to number 58 and number 56 on the charts, but the album's sales trumped all of the chart statistics, giving REO its second platinum-selling album. Songs like "Do You Know Where Your Woman Is Tonight" and "Blazin' Your Own Trail Again" are well groomed around the edges, sounding smoother and more established than the band's earlier material. The harmonies on most of the songs stick to the guitar chords, and even the frantic "Unidentified Flying Tuna Trot," a wild and flighty guitar piece, is unraveled with tornado-like power. With the guitars sounding louder, the songs running quicker, and the culmination of both being well maintained, Tuna Fish proved that the members of REO Speedwagon could play rock & roll when they had to. 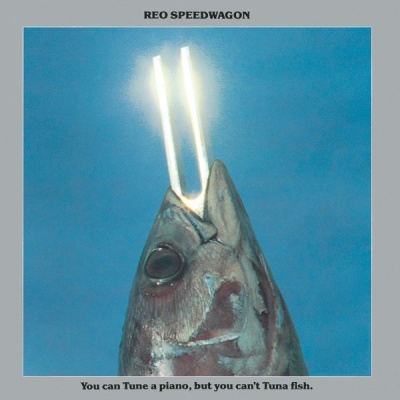 You Can Tune a Piano, But You Can't Tuna Fish Album Information