Wouldn't It Be Great Review

Loretta Lynn is about as iconic as female country music stars get, and she's been celebrated for her songwriting -- honest, eloquent, and often a brilliant expression of the realities of an adult's life -- as much as her singing. So it's at once fitting and curious that 2018's Wouldn't It Be Great was produced with the express purpose of highlighting Loretta Lynn the songwriter -- her work certainly merits praise, but nearly every Loretta Lynn album is in some way a master class in country songwriting. Nevertheless, producers John Carter Cash and Patsy Lynn Russell (the latter is Lynn's daughter) have designed Wouldn't It Be Great as a songwriter's showcase, with new recordings of a few gems from her songbook sharing the set list with six new tunes, several written in collaboration with Shawn Camp. Most of the performances on Wouldn't It Be Great are built around low-key acoustic arrangements, with some stellar bluegrass pickers joining the studio band, including Sam Bush, Ronnie McCoury, and Randy Scruggs. The music is full-bodied but mindful of dynamics, and serves Lynn well as a vocalist; her voice at the age of 86 is remarkably strong and limber, little changed from her salad days in the '60s and '70s, and if the reduced volume means she doesn't have to belt as hard, she is clearly still in firm command of her instrument. (And the livelier numbers like "Ruby's Stool" and "Don't Come Home a Drinkin'" show she hasn't abdicated her position as a honky tonk heroine.) The new songs are uniformly strong (especially "Another Bridge to Burn" and "I'm Dying for Someone to Live For"), and it's clear that Lynn hasn't lost her stride either as a composer or as a vocalist, which makes the presence of the remakes a bit puzzling. It's not as if Lynn hasn't already cut definitive versions of "Coal Miner's Daughter" or the title song, and while her new versions are very good, they're a long way from essential and feel a bit like padding. Wouldn't It Be Great is proof that Loretta Lynn is still a vital artist and one of America's great treasures, but it might have been better if they'd waited long enough to let her write a full album's worth of material, or even if she'd included some covers she'd never recorded before. 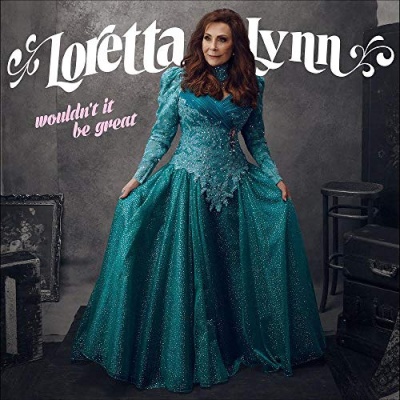 Wouldn't It Be Great Album Information