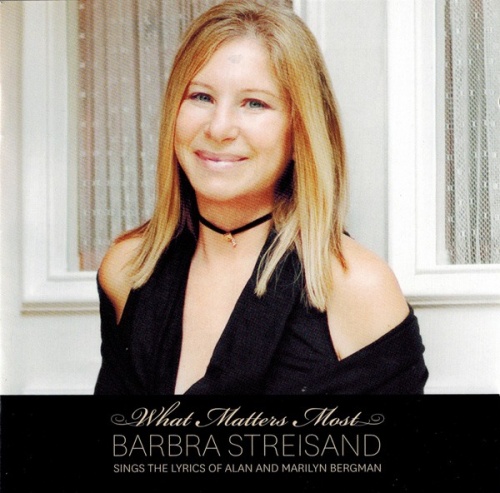 Over the course of 50 years, Barbra Streisand has enjoyed a special relationship with Alan and Marilyn Bergman. All three are Brooklyn-born (in the same hospital, no less) and, as Streisand writes in the liner notes, she describes their relationship not only as a friendship but as a love affair. Produced by Streisand herself, What Matters Most presents ten of the Bergmans' songs that she had never sung before -- which makes this not just a set of re-recordings but a living document, and not just a tribute from a friend, but a set of great songs sung by a great singer. Alan and Marilyn Bergman's lyrical focus is the love song, or more precisely, love over the years. (Just examine the lyrics to a couple of the Bergman songs Streisand has already recorded, such as "The Way We Were," "How Do You Keep the Music Playing?," and "What Are You Doing the Rest of Your Life?") Obviously, Streisand knows this material very well, and she devotes the entire album to the type of soft, straightforward balladry that forces listeners' attention to her friends' lyrics. She never moves into swing -- not even when singing "Nice 'n' Easy," which Frank Sinatra made the centerpiece and opener of his 1960 LP of the same name. Although the arrangements and material are monochromatic, What Matters Most isn't a failure by any means, thanks to Barbra Streisand's interpretive skills (as well as her flair for drama and her ever-beautiful voice). That said, this is not a record for those who love precocious Streisand best (Funny Girl, Hello, Dolly!).