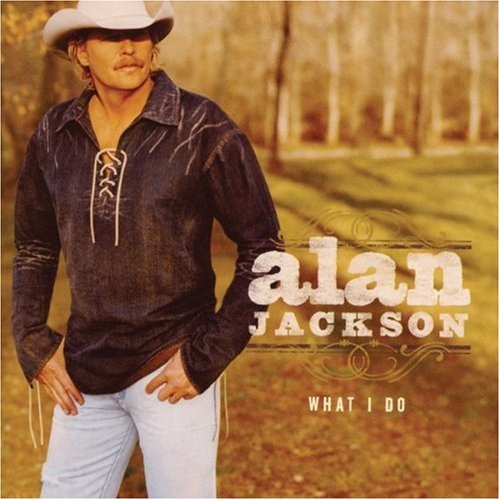 Alan Jackson had been a star for a long time before he released Drive in 2002, but that album turned him into a superstar, largely because it had the post-9/11 anthem "Where Were You (When the World Stopped Turning)," a crossover smash that made Jackson a household name. Unlike some of his peers, he didn't embrace this opportunity to become an omnipresent celebrity, he turned out a second greatest-hits album in 2003 -- complete with another crossover hit in the Jimmy Buffett duet "It's Five O'Clock Somewhere" -- before returning with the full-length What I Do in September of 2004. Filled with straightforward, unadorned honky tonk and gentle, rolling ballads, What I Do makes it clear that Jackson doesn't have the slightest interest in becoming a full-fledged, crossover country-pop star. This is the purest country album he's cut in a long time, but what makes it one of his very best albums isn't its purity, it's how it's delivered with a quiet confidence, a big heart, and a sly sense of humor. Jackson has backed away from any big social statements -- there is a song called "USA Today," but far from being a comment on either the state of the world or his celebrity, it merely tells the tale of "the loneliest man in the U.S.A. today" -- and sings about love, heartache, churches, fixing cars, and wishing "If French Fries Were Fat Free." As that last song suggests, he's learned from his idol George Jones that even songs about heartbreak can be just as effective if delivered with a sense of humor, but the best joke here is "The Talkin' Song Repair Blues," where Jackson haggles with a mechanic who fancies himself a songwriter. Despite these moments of levity, much of What I Do is heavy on ballads. While it's true that the loping drinking song "Strong Enough" and rip-roaring "Burnin' the Honky Tonks Down" are so good it's hard not to wish Jackson threw a few more ravers into the mix, each of these ballads works splendidly, whether it's the sweet "Too Much of a Good Thing," the gently supportive "There Ya Go," or the aching "Rainy Day in June." Given the preponderance of ballads and the laid-back delivery, What I Do has an intimate, relaxed feel, the polar opposite of a sequel to a blockbuster like Drive usually is. But instead of feeling like a retreat, What I Do feels like one of Jackson's most assured and best albums, proof positive that he's the best mainstream country singer of this decade.