Classical composer/conductor Leonard Bernstein periodically had tried his hand at writing Broadway musicals, starting with On the Town (1944) and continuing with Wonderful Town, (1953), not to mention, less than a year earlier, Candide, a musically magnificent, dramatically unsuccessful effort. But none of these was as ambitious as West Side Story, a score that is infused with Bernstein's classical sensibility, even as it deliberately draws in influences from jazz and Latin music. A contemporary retelling of Romeo & Juliet set among New York street gangs, the show combines refined and vulgar elements, and Bernstein's music revels in the contrasts, veering from the hymn-like themes he provides for the lovers' ballads (they may be Italians on one side and Puerto Ricans on the other, but they're probably all Catholics, so the religious influence is something they have in common) to the jarring rhythms that accompany the continual "rumbles" of the gangs. Newcomer lyricist Stephen Sondheim traces the same contrast in his words. For the Romeo character, here called Tony, the mere name of his Juliet, here called Maria, has religious significance: "Say it loud and there's music playing," he sings in a song called "Maria," "Say it soft and it's almost like praying." In this song, as in their duets "Tonight" and "One Hand, One Heart," Tony and Maria are not just idealistic, but idealized, and Larry Kert and Carol Lawrence embody them well. On the other hand, Sondheim fills the language of their friends with a rough slang that sometimes alludes to common obscenity (e.g., "when the spit hits the fan") and sometimes pushes the limits of language allowable on a Broadway stage in the '50s ("bastard," "S.O.B."). When they're not cursing, these characters engage in biting criticism and sarcasm. "America," a song of dueling Puerto Rican girls, one who wants to go home and one who wants to stay in Manhattan (the fiery Anita, ably played by Chita Rivera), and "Gee, Officer Krupke!," a gang's taunting of a police officer, are not just typical comic songs in a Broadway musical. They are savagely witty, marking the introduction of a lyricist on a par with Lorenz Hart or Cole Porter, at the very least. That said, however, this isn't really a lyric-oriented show, or even a character-oriented one, oddly enough. It is notable that the album cover says, "West Side Story (based on a conception of Jerome Robbins)," not "based on a play by William Shakespeare." Robbins, the show's director/choreographer, has conceived it as a dance show, and there are extended instrumental passages on this album during which the stage actors would be dancing, although one only hears them shouting occasionally and snapping their fingers. Powerful as Bernstein's music is, and clever as Sondheim's lyrics are, West Side Story is largely about dancing, which means that only a portion of it can be appreciated on disc. That is enough, however, to mark it as a landmark among Broadway cast albums as well as Broadway musicals. 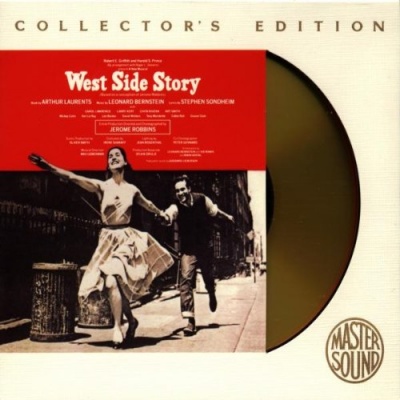