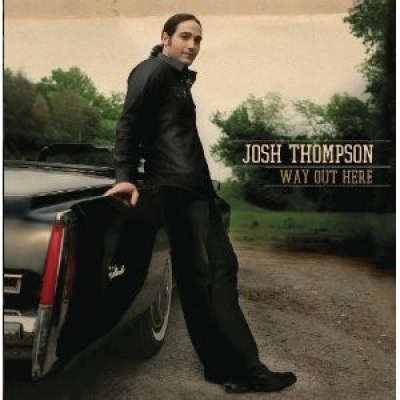 Josh Thompson first received attention as the professional songwriter who penned the title track for Jason Michael Carroll’s second album Growing Up Is Getting Old, so it’s not entirely a surprise that Thompson’s 2010 debut Way Out Here is cut from the same nostalgic cloth as Growing Up, containing paeans to small towns ruled by John Wayne, Johnny Cash, and John Deere, and laying all blame at the feet of Waylon Jennings. Clearly, with all this name-dropping -- and that’s only the tip of the iceberg, as there’s lovemaking to Haggard cassettes -- Thompson intends to have some outlaw dust rub off on his shoulders, and he does keep things pretty lean but his good intentions are undercut by his thin, cuddly voice and a taste for corn, both coming to a head in the ghastly coda on “You Ain’t Seen Country Yet” where Thompson and crew sing “bowmp chicka wow wow,” because nothing says country like mimicking funk guitars with your mouth. This is the only incident where Thompson’s rocking country goes off the deep end, but it makes a lasting impression, suggesting those snapping twangs of the guitars and big boasts are all for show, which is partially true: no matter how much he sings about putting “Beer on the Table” and slugging back the longnecks on “Won’t Be Lonely Long,” Thompson just seems a little bit too clean to be rowdy. Nevertheless, he’s a good craftsman -- “Beer on the Table” not only kicks, it has a couple of sly lyrical phrases and he has a nice, gentle touch with the ballads -- and his essential sweetness is ingratiating, if not exactly exciting. That all makes for good radio country, the singles being the kind that gain strength with repetition, but there’s just enough ambition here to suggest that he wants to be something more, but can’t quite get there yet.