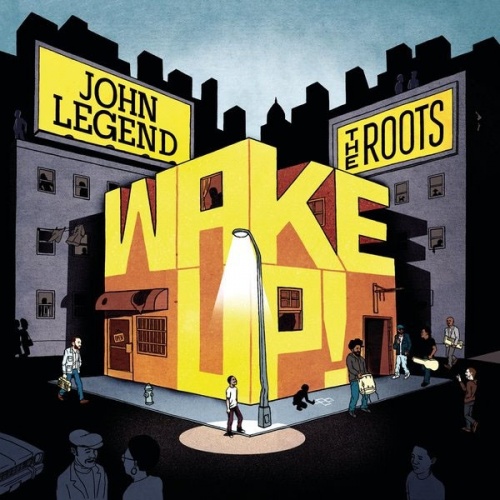 The sticker affixed to the cover of this album should read “GOOD IDEA.” On Wake Up!, the funkiest, most flexible band on the planet backs one of the most skilled and accomplished singer/keyboardists in modern R&B. Stirred by Barack Obama's 2008 presidential campaign and the social climate, the Roots and John Legend, with appearances from Black Thought, C.L. Smooth, Common, Melanie Fiona, and Malik Yusef, reinterpret a soul-dominated set of ever-relevant songs from the ‘60s and ‘70s. A few exceptions aside, the source material will be unfamiliar to the average fan of the artists. In January 1976, the motivational “Wake Up Everybody” was a number one R&B single for the Teddy Pendergrass-led Harold Melvin & the Blue Notes. During the 2000s, versions of Eugene McDaniels' fiery “Compared to What” appeared in unlikely forms: a soft-drink commercial starring Mya and Common, and an episode of Lost, when a Les McCann and Eddie Harris take played on the Swan turntable. Otherwise, the majority of those who play this album will hear it with a fresh set of ears. The intent is not to improve upon the originals but to update them, introduce them to a younger audience, and inspire. The burning passion of the players cannot be denied, whether conveyed during the hushed “Wholy Holy” (first recorded for Marvin Gaye's What’s Going On) or the muscular “Our Generation” (Ernie Hines). There are several instances when the Roots, who are deeply intimate with grit, outshine Legend, whose polished and pride-rich voice occasionally clashes with the material. This is most evident on “Hard Times,” a terrifying song written by Curtis Mayfield and recorded by Baby Huey. The Roots lunge into it with cold-blooded precision, but the lyrics (“Eatin’ Spam, Oreos, drinkin’ Thunderbird”), when voiced by Legend, do not resonate. On a 12-minute version of “I Can’t Write Left-Handed,” written by Bill Withers after encountering a soldier who lost his right arm fighting in the Vietnam war, guitarist Captain Kirk Douglas lets loose a solo that trivializes Legend’s litany of yeahs and sounds more raw, impulsive, and impassioned than any vocal on the set. Older folks who approach the album for the sake of hearing a band play old-school rhythm & blues should familiarize themselves with the Roots catalog, beginning with Game Theory, Rising Down, and How I Got Over. Those albums are just as significant and vital as the songs honored here.