Waitin' in the Country Review

On the cover of his 2007 debut, Waitin' in the Country, Jason Michael Carroll certainly looks like a hunk -- and not just a country hunk, either; he looks like Samantha's main man Smith during the waning days of Sex & the City, which means he's marketable not just to the country audience but perhaps to the crossover audience as well. So, he looks the part of a country idol and, with his warm, rounded baritone, he sounds like one too, a picture-perfect definition of what a modern country singer should be, so it should come as no surprise that Waitin' in the Country also sounds perfectly tailored toward country conventions in the mid-2000s. Carroll never shies away from cliché on this album -- he feels at home in the country, will sleep when he's dead, has "Honky Tonk Friends," lives in "Anywhere USA," and finds "No Good in Goodbye" -- and the music is a blend of familiar arena rock riffs and new traditionalist swagger, tempered by more than its fair share of treacly sentiment on the ballads. But if Waitin' in the Country never defies convention, it never does it badly, either. Sure, some of it can be silly -- whether it's the prefabricated rowdy shout-alongs on the chorus of "Honky Tonk Friends" or the line "The people trust the steeple/And the steeple don't lie" on the title track -- but Carroll comes across as a likeable, ingratiating guy next door: he may look like a model, but there's an ordinariness in his voice that's endearing. It also suits his friendly, ordinary country and helps make Waitin' in the Country an enjoyable first album despite its occasional lapses into saccharine pop and a slight lack of truly memorable material. 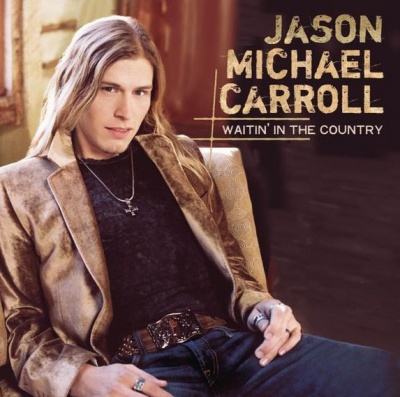 Waitin' in the Country Album Information