V.S.O.P. is a landmark album in the history of jazz, though not at all in the way it was intended. George Wein organized a Herbie Hancock retrospective concert at the 1977 Newport Jazz Festival in New York where three bands from Hancock's past and present -- the 1965-1968 Miles Davis Quintet with Freddie Hubbard deputizing for the indisposed Miles, the 1969-1973 sextet, and Hancock's then-current jazz-funk outfit -- would share the stage. As things turned out, it was the Miles band reunion that grabbed most of the attention, leading to several tours which in turn inspired a whole generation of young musicians (led by Wynton Marsalis) to turn their backs upon electronics and make bop-grounded acoustic jazz the lingua franca of jazz for the rest of the 20th century. This is not the outcome the forward-looking Hancock would have preferred, but you cannot deny that he, Hubbard, Wayne Shorter, Ron Carter and Tony Williams sound marvelously in sync with each other, playing in a free-flowing, post-bop style none of them had touched in years. (Hancock is actually playing a Yamaha electric grand piano, not an acoustic grand -- there's a substantial sonic difference, yet one that went unremarked upon by otherwise-watchful purists at the time). The concert also turned out to be a farewell to the great Hancock Sextet (which has yet to reunite on records); this group actually made the most absorbing, adventurous music of that evening, with trumpeter Eddie Henderson laying a more credible claim to Miles' pithy idiom than Hubbard had earlier. The sextet plays only two numbers: "Toys" and "You'll Know When You Get There." It's a pity there isn't more. The two-LP set concludes with a somewhat disappointing jazz-funk set from a post-Headhunters edition band with Bennie Maupin and Paul Jackson as holdovers. They don't quite raise the temperature, or the complexity level as high as earlier Hancock jazz-funk outfits. The contrast between Hancock's present on this given day and his illustrious past was no doubt used as ammunition by the back-to-bop crowd to proclaim that "fusion" has got to go, which was unfair. The reverberations from this concert continue to this day. 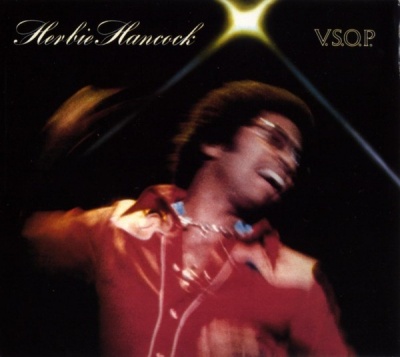