In 1988, few heavy metal bands were comprised of all black members, and fewer had the talent or know-how to inject different musical forms into their hard rock sound (funk, punk, alternative, jazz, soul, rap) -- but N.Y.C.'s Living Colour proved to be an exception. Unlike nearly all of the era's metal bands, the group's music has held up over time, thanks to its originality and execution. Living Colour leader/guitarist Vernon Reid spent years honing his six-string chops, and was one of the most respected guitarists in New York's underground scene. He couldn't have done a better job selecting members for his new rock band -- singer Corey Glover, bassist Muzz Skillings, and drummer Will Calhoun -- as their now-classic debut, Vivid, proves. Though the album was released in mid-1988, it picked up steam slowly, exploding at the year's end with the hit single/MTV anthem "Cult of Personality," which merged an instantly recognizable Reid guitar riff and lyrics that explored the dark side of world leaders past and present (and remains LC's best-known song). The album was also incredibly consistent, as proven by the rocker "Middle Man" (which contains lyrics from a note penned by Glover, in which he pondered suicide), the funky, anti-racist "Funny Vibe," the touching "Open Letter (To a Landlord)," plus the Caribbean rock of "Glamour Boys." Add to it an inspired reading of Talking Heads' "Memories Can't Wait," the Zeppelin-esque "Desperate People," and two complex love songs ("I Want to Know" and "Broken Hearts"), and you have one of the finest hard rock albums of the '80s -- and for that matter, all time. 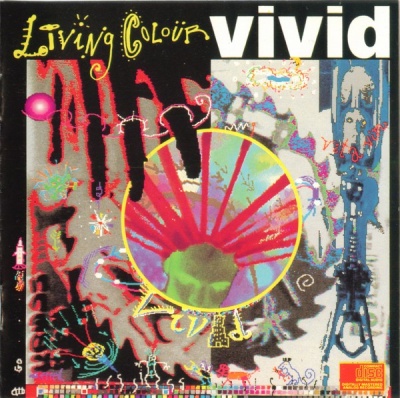