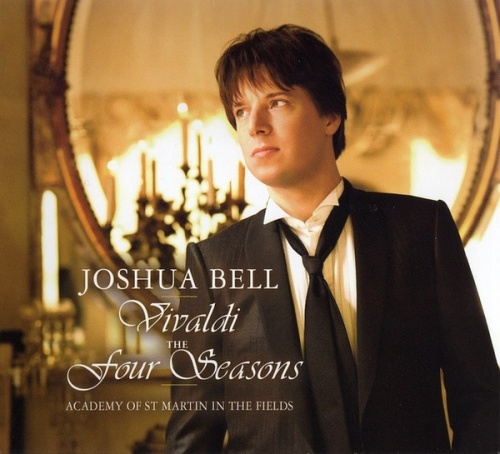 When the Academy of St. Martin-in-the-Fields began to popularize Vivaldi's music in the 1970s, it was on the cutting edge with its light, warm chamber orchestra sound, burnished to technical perfection yet sounding completely different from its symphonic cousins. Now, a recording like this one, with star violinist Joshua Bell, sounds conservative in comparison with young bucks like Fabio Biondi on the historical-performance side or even the young Dutch firebrand Janine Jansen. This big-budget (by classical standards) release is the kind of thing you don't see so often now, with a big poster showing Bell carefully decked out in a partially undone tie, as well as individual full-color cards reproducing, in Italian and English, the descriptive seasonal sonnets that provide the program for the four concertos. It could have collapsed under its own weight, but Bell pulls it off. Conducting the Academy strings himself, he forges tight, not-overly-sweet recordings of Vivaldi's four familiar concertos, with a nice contrast between orchestra and solo that showcases his easy, compelling agility and his Heifetz-like sharpness and brilliance. There's nothing fancy about the recording, which resembles in its basic outlines many of those released by mainstream chamber orchestras a couple of decades ago, but it's just extraordinarily carefully and sharply done, with slight broadenings of tempo at the ends of intricate phrases to give Bell space to show his stuff. The programmatic drama of the music is never shortchanged, but never overdone. In a way, with every performer feeling that he or she has to say something new about the Four Seasons, it's nice to find one who is confident enough not to have to do that. In fact, the one moment where the mood is broken comes when Bell does attempt something unorthodox: the slow movment of the "Winter" concerto (track 11), which he takes a good deal faster than Largo and articulates the cadences in a fussy way. The recording is rounded out by Tartini's Sonata in G minor for violin and continuo ("The Devil's Trill"), which has the effect of a release into the realm of spectacular display after the taut beauty of the Vivaldi. It's a recording worthy of Bell's star quality, a fine Four Seasons for those not ready to take the plunge into historical performance, and an impressive feat of (mostly) studio engineering.