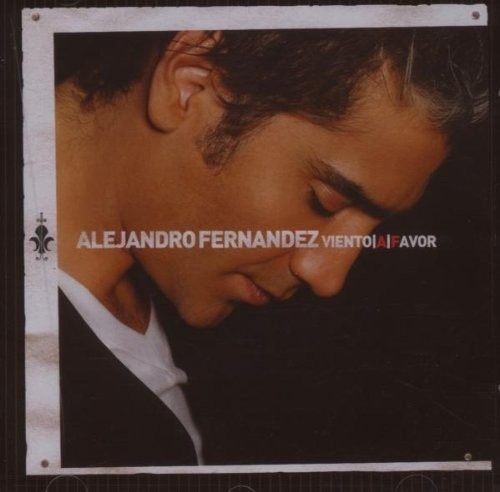 Viento a Favor, the first studio album by Alejandro Fernández in three years, is in several ways a continuation of the modern Latin pop style showcased on his previous effort, A Corazón Abierto (2004). Though producer/songwriter Kike Santander is nowhere to be found on Viento a Favor, his co-producer on A Corazón Abierto, Aureo Baqueiro, is once again at the helm. Not only does he produce the album, giving it a modern touch that is both vibrant and dynamic; he also earns a couple songwriting credits. Also collaborating with Fernández once again are songwriters Leonel García (of the Latin pop duo Sin Bandera), Gian Marco, and Jaime Flores; each was responsible for one of the three standout hits on A Corazón Abierto: "Me Dediqué a Perderte" (García), "Canta Corazón" (Marco), and "Qué Lástima" (Flores). Singer/songwriter Reyli Barba (aka Reyli, formerly of the band Elefante) also collaborates with Fernández again, contributing two songs this time, including "Amor Gitano," a duet with Beyoncé co-written with Flores. If that weren't enough production and songwriting talent on hand, Fernández also recruited the songwriting abilities of García's groupmate in Sin Bandera, Noel Schajris (who contributed the song "Solitario y Solo"), and up-and-coming Columbian singer/songwriter Fonseca ("Eres"). So, like its predecessor, Viento a Favor is studded with some of the best Latin pop production and songwriting talent of its time. This is most evident on the album-opening lead single, "Te Voy a Perder," an emotionally moving break-up song, as well as the follow-up single, "No Se Me Hace Fácil," another emotional song about love gone bad, this one decked out in multi-tracked vocals, soaring strings, hard-hitting drums, and even an electric guitar solo toward the end of the song. As for Fernández himself, he sounds engaged throughout Viento a Favor, putting his heart into the songs and singing with true emotion. If sometimes he sounds like one of the numerous hired hands involved with the making of an album this extravagant, that's simply the consequence of crafting a blockbuster pop album such as this. Those who prefer the more stripped-down, intimate ranchera efforts of Fernández such as Niña Amada Mía (2003) may be disappointed with the level of popcraft showcased throughout Viento a Favor, which, like A Corazón Abierto before it, is intended for a mainstream audience. But for those who enjoy Fernández's mainstream efforts, there's plenty to enjoy here on this well-crafted album, surely one of his best pop efforts to date.