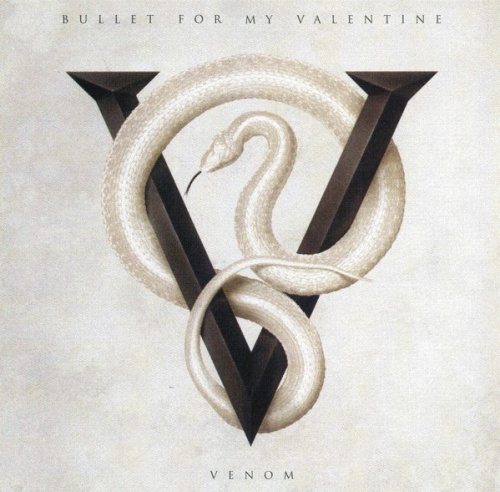 The Welsh metal unit's fifth studio long-player, the aptly named Venom finds Bullet for My Valentine on the defensive, offering up a meaty and aggressive 11-track set aimed squarely at diffusing some of the concerns that fans voiced upon the release of 2013's uneven Temper Temper. After a short ambient intro, the band wastes little time in getting their hands dirty, digging into the first single "No Way Out" with all the delicacy of a lion pack descending on a broken-legged gazelle. A visceral mix of taut, dueling guitar-monies, old-school thrash propulsion, and a chorus that burrows into your eardrums and lays eggs, it's the perfect opening volley, even though it sets the bar a bit high for what follows. Bullet for My Valentine have always worn their influences proudly (and loudly) on their tattered sleeves (Metallica, Anthrax, Iron Maiden, Pantera, etc.), and that penchant for classicist metal serves as Venom's foundation, but the band is also a product of its time, and post-hardcore breakdowns and generic blasts of screamo-fueled angst are likely to creep in and occasionally dumb down the proceedings, especially on less immediate cuts like "Worthless" and "Harder the Heart (The Harder It Breaks)." That said, it's hard to find fault with the album's high points, as each of them, from the aforementioned "No Way Out" to the brooding, slow-burn title track and the unabashedly stadium-ready "You Want a Battle? (Here's a War)," undeniably play to the group's strengths. The band's detractors will probably complain that the template remains firmly in place, and the band is aimlessly trekking through well-trodden terrain, but by returning to their roots, Bullet for My Valentine seem to have reignited the spark that made their early work so vital.