Since the late 2000s, American-born, London-based alt-rock outfit Cage the Elephant have had a prolific output of material that has traversed an eclectic array of style and sound; initially delivering accessible pop song structures laden with bluesy, punk-infused vocals and guitar work alongside a somewhat defiant Iggy Pop-esque attitude, the band eventually arrived at a more psychedelic sound with its 2015 effort, Tell Me I'm Pretty. The latter proved to be more akin to the bright hedonism and transparent honesty, identifiably representative of Jim Morrison and the Doors, all packed into a sleek production package, albeit not shy of the grit and fuzz of the garage rock aesthetic, harnessed by producer Dan Auerbach of the Black Keys. Here, Cage the Elephant present their second live record, aptly entitled Unpeeled, a 21-track belter of stripped-back, alternate versions of popular cuts from their back catalog, without losing any of the aforementioned grit or attitude. Consisting of live recordings from various venues across the States in support of Tell Me I'm Pretty, a lot of it hardly sounds live at all (in the best sense); the band's performances are tight, unwavering, and flawless in their execution. Unpeeled is a long live album, but the band manages to arrest the listener by taking twists and turns in each song performance. It's a consistently good listen, although there are of course highlights; tracks such as "Punchin' Bag," "Trouble," and "Shake Me Down" are concrete reminders of the group's penchant for lyrical storytelling and affinity for hooks and melody, powerfully translated here with an organic setup. A lot of moments also bring to mind some of the techniques used on the Beatles' Revolver, with prominent and effective use of what sounds like live double-tracking and tape delay. The last third of the record shines the best; live favorite "Come a Little Closer" is punctuated with a beautifully rich and resonant string accompaniment, while penultimate track "Cigarette Daydreams" begins with Matt Shultz filling up the venue with his howling vocals atop a sonorous lone acoustic guitar before the rest of ensemble comes in; pronounced, tightly wound snares and kick drum carry the rest of the song alongside forlorn strings and piano, before a skin-crawling middle-eight section in which the audience sings the song's main refrain ("You can drive all night/Looking for the answers in the pouring rain...") in magical unison. The album ends with Thank You, Happy Birthday closer "Right Before My Eyes" -- one last chance for a sorrowful yet warm performance, enriched with more strings, reverb, and Shultz's pained voice echoing out into the darkness. Unpeeled is a great live album that not only encapsulates Cage the Elephant's ability to honor, reference, and tribute the sonic feel of Zeitgeists past, but ultimately reminds you that all it takes is a simple song with minimal instrumentation about introspection, yearning, or internal struggles to still achieve a huge, soaring sound that makes the hairs on the back of your neck stand up. 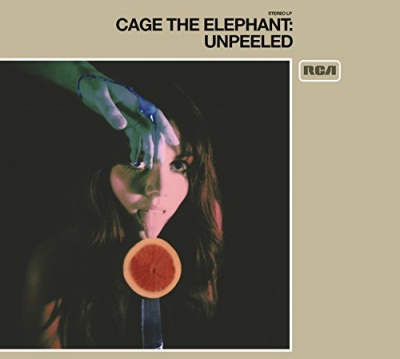