Under My Skin Review

Part of Avril Lavigne's appeal -- a large part of it, actually -- is that she's a brat, acting younger than her 17 years on her 2002 debut, Let Go, and never seeming like she much cared about the past (she notoriously mispronounced David Bowie's name when reading Grammy nominations), or anything for that matter. She lived for the moment, she partied with sk8er bois, she didn't want anything complicated, and she sang in a flat, plain voice that illustrated her age as much as her silly, shallow lyrics. Those words got disproportionate attention because they were so silly and shallow, but most listeners just didn't care because, thanks to producer gurus the Matrix, they were delivered in a shiny package filled with incessant, nagging hooks -- a sound so catchy it came to define the mainstream not long after Let Go hit the radio. The Matrix became ubiquitous on the strength of their work with Lavigne, who herself became a big star, earning constant play on radio and MTV, kick starting a fashion trend of ties-n-tank tops for girls and inexplicably providing a touchstone for indie rock queen Liz Phair's mainstream makeover. Fame, however, didn't pull the two camps together; it pushed them their separate ways, as the Matrix went on to record their own album and Avril decided to turn serious, working with a variety of co-writers and producers, including fellow Canadian singer/songwriter Chantal Kreviazuk, for her second album, 2004's Under My Skin. Lavigne hasn't only shed her trademark ties for thrift-shop skirts, she's essentially ditched the sound of Let Go too, bringing herself closer to the mature aspirations of fellow young singer/songwriter Michelle Branch. Since Avril is still a teenager and still a brat, it's livelier than Branch. Even when it sags under minor keys and mid-tempos, it's fueled on teen angst and a sense of entitled narcissism, as if she's the first to discover the joys of love and pain of heartache. In a sense, she comes across as Alanis Morissette's kid sister, especially now that the Matrix are gone and the hooks have been pushed to the background for much of the record; it's the teen spin on Supposed Former Infatuation Junkie, where she's self-consciously trying to grow as an artist. Naturally, this means that Under My Skin is less fun than Let Go since there's nothing as giddy as "Sk8er Boi," even if much of it is written from a similarly adolescent vantage. Lavigne's collaborators, Kreviazuk and Evan Taubenfeld chief among them, have helped streamline her awkward writing, and her performances are also assured, which almost makes up for the thinness of her voice, which sounds far younger than the meticulous arrangements around it. So, Under My Skin is a bit awkward, sometimes sounding tentative and unsure, sometimes clicking and surging on Avril's attitude and ambition. But it's telling that the one song that really catches hold on the first listen and stands out on repeated spins is "He Wasn't," the fastest, loudest, catchiest, and best song here, and the one closest to the spirit and sound of Let Go -- it's not that Lavigne hasn't matured, but it's that her talents are better suited on music that's a little less contemplative and deliberate than Under My Skin. 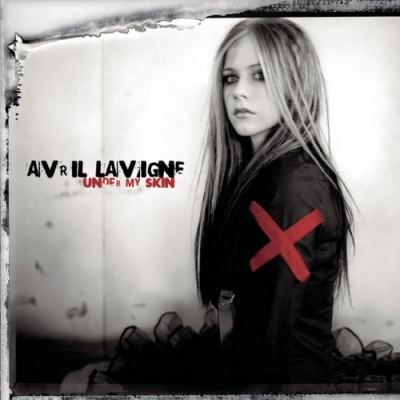 Under My Skin Album Information