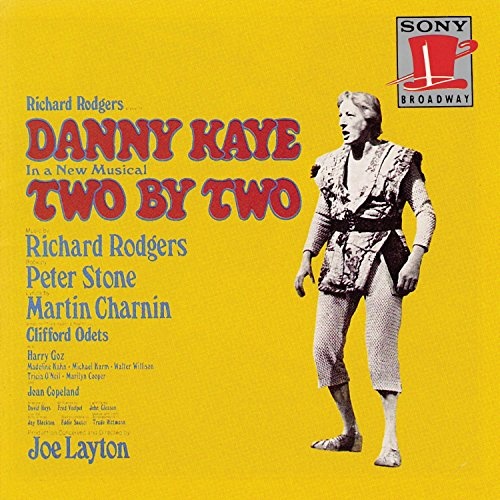 Clifford Odets' final play, The Flowering Peach, based on the Biblical story of Noah and the Ark, opened on Broadway on December 28, 1954, to wildly mixed reviews and closed after 135 performances as a financial failure. Two by Two, the musical based on The Flowering Peach, was more fortunate, opening on November 10, 1970, to equally mixed reviews, but running 343 performances, which was enough to turn a small profit. The show had two main attributes: the music was by 68-year-old Richard Rodgers (the veteran composer's 38th Broadway score and his first in five years) and the star was 57-year-old Danny Kaye (the comic film star's first Broadway show in three decades). Both principals are well displayed on the original Broadway cast album recorded five days after the opening. Martin Charnin (later to gain fame with his next musical, 1977's Annie) wrote the adequate lyrics to Rodgers' tunes, which were fairly typical of him, boasting strong melodies and alternating between waltzes like the opening song, "Why Me?," and the comic second number, "Put Him Away." Kaye, pretending to be 600 years old most of the time (except when God temporarily made him "Ninety Again!"), sounds older than his years on many of the songs, but remains feisty and funny. His supporting cast has trouble keeping up, although Madeline Kahn manages to distinguish herself in her solo song, "The Golden Ram." The show's big ballad (recorded contemporaneously by Tony Bennett) is "I Do Not Know a Day I Did Not Love You," and it's good but not the quality of a standard. Much the same can be said about the rest of the score. The 1992 reissue contains liner notes by Marc Kirkeby (translated into three languages!) that detail the show's notorious history, due to Kaye's antics after he was injured and began taking extreme liberties with the libretto while roaming the stage in a wheelchair or on crutches. None of that is reflected on the cast album, which preserves the show's music as it was heard at the opening, but it makes interesting reading.