There's a reason Turnstiles begins with the Spector-esque epic "Say Goodbye to Hollywood." Shortly after Streetlife Serenade, Joel ditched California -- and, by implication, sensitive Californian soft rock from sensitive singer/songwriters -- for his hometown of New York. "Say Goodbye to Hollywood" was a celebration of his move, a repudiation of his past, a fanfare for a new beginning, which is exactly what Turnstiles was. He still was a singer/songwriter -- indeed, "Summer, Highland Falls" was his best ballad to date, possibly his best ever -- but he decided to run with his musical talents, turning the record into a whirlwind tour of pop styles, from Sinatra to Springsteen. There's little question that the cinematic sprawl of Born to Run had an effect on Turnstiles, since it has a similar widescreen feel, even if it clocks in at only eight songs. The key to the record's success is variety, the way the album whips from the bouncy, McCartney-esque "All You Wanna Do Is Dance" to the saloon song "New York State of Mind"; the way the bitterly cynical "Angry Young Man" gives way to the beautiful "I've Loved These Days" and the surrealistic apocalyptic fantasy "Miami 2017 (Seen the Lights Go Out on Broadway)." No matter how much stylistic ground Joel covers, he's kept on track by his backing group. He fought to have his touring band support him on Turnstiles, going to the lengths of firing his original producer, and it was clearly the right move, since they lend the album a cohesive feel. Turnstiles may not have been a hit, but it remains one of his most accomplished and satisfying records, clearly paving the way to his twin peaks of the late '70s, The Stranger and 52nd Street. 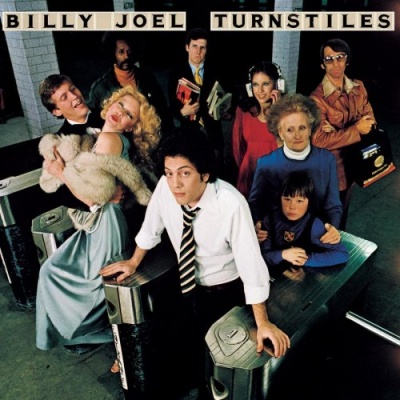