True to the Blues: The Johnny Winter Story Review

There has always been more to the Johnny Winter story than meets the eye, and if stepping into the role of a whirlwind albino electric blues guitar player from Texas with a brilliant slide style was the very role he was born to fill, he took a while to get there. For starters, he was born in Mississippi, which might explain something, and then grew up in Texas, where he played clarinet before switching over to guitar at the age of 11. Early on he played country before discovering the blues, and realizing there was no money and little future in playing the blues, he turned to studio pop in the early '60s. Times change, though, and by the end of that decade Winter had returned to the blues, where being an amazing electric guitar player with a roaring voice brought him his true calling. That's where this four-disc, 56-track box set picks up the story, the first such set to span the commercial and in-the-public-eye portion of Winter's career, beginning in 1968 and running all the way through to his Roots album, which was released in 2011, deftly drawing on some 27 albums from various labels, including Liberty/Imperial, Columbia, Blue Sky/Epic, Alligator, Point Blank/Virgin, Friday Music, Collectors' Choice Music, Megaforce, and Legacy. It's an impressive catalog of blistering slide runs and manic, propulsive blues shuffles, stomps, and boogies, all delivered with Winter's roar of a voice. Winter's career has made him nothing short of a monument, really, in the postmodern blues world, an iconic player who could take a song like Bob Dylan's "Highway 61 Revisited" (included here) and make it his own, turning out what is perhaps the definitive version of it in much the same manner that Jimi Hendrix did with Dylan's "All Along the Watchtower." It's an apt comparison, really, because although Winter never quite had the theatric flair that Hendrix had (one can't imagine Winter burning a guitar on-stage, for instance), he may have been just as responsible for the idea of modern power blues, and certainly no one has done it longer or done it any better than Johnny Winter. This box set presents a huge slab of that legacy. 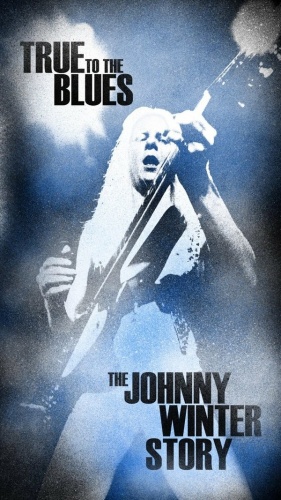 True to the Blues: The Johnny Winter Story Album Information