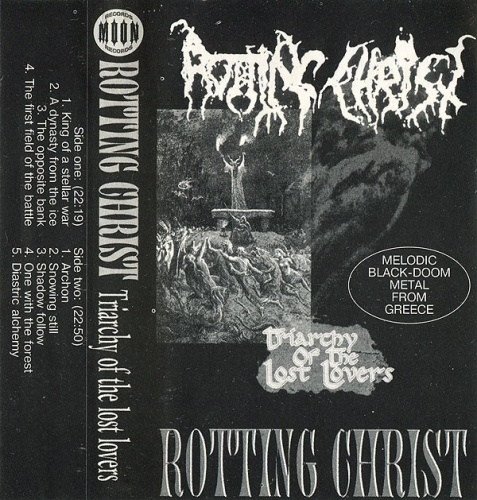 After just two surprisingly well-crafted albums, Rotting Christ arguably hit their creative bulls-eye with 1996's stylistic landmark, Triarchy of the Lost Lovers, their first release for Century Media Records. Fulfilling all the promises and hints dropped by its predecessors, Triarchy saw the Greek band turning their backs decisively on pedal-to-the-metal thrashing and embracing majestic, slower tempos instead. As a result, their chugging riffs, twin guitar harmonies, and impeccable melodies were intertwined to perfection on outstanding fare like "King of a Stellar War," "A Dynasty from the Ice," and "The First Field of the Battle," which were quite simply as classy as black metal gets. The only exception to this newfound restraint was made for exceptional concert favorite, "Archon" -- and with good reason, since its unrestrained savagery was rendered all the more potent in the process. Amongst the album's remaining cuts, other striking moments were also to be had during "The Opposite Bank," which contrasted pummeling double kick-drum breaks with discreet synthesizer backdrops, and "Diastric Alchemy," featuring a melody so huge, it actually served as the song's chorus. And precisely because it represented such a break from black metal clichés, it's no wonder that Triarchy of the Lost Lovers still stands as one of the most unique and consistent extreme metal albums of the 1990s.