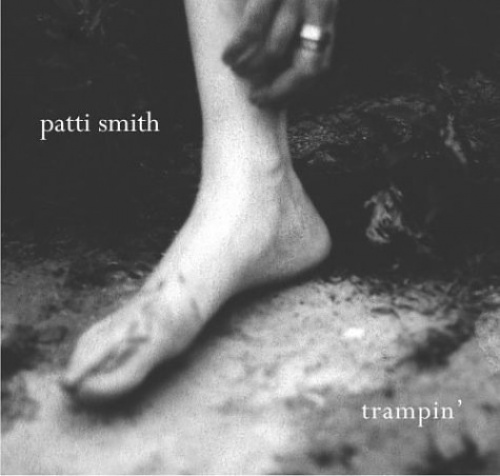 Nearly 30 years and nine albums in, Patti Smith shows no signs of giving up, or giving in, despite the fact she expected to be quietly doing her work instead of making rock & roll albums and playing in front of audiences. But then 9/11, Afghanistan, war in Iraq. Smith lives the vocation of a poet in an old-world sense of that word. Once, bards were the gadflies of society. Smith's Trampin' is a work that directly evolves from that tradition and fits squarely in her oeuvre. Trampin' is Smith's first outing for new label Columbia. She and her bandmates -- Lenny Kaye, Jay Dee Daugherty, Tony Shanahan, and Oliver Ray -- walk the tightrope between in-your-face garage rock, poetic ballads, and raucous, improvisational pieces (à la "Radio Ethiopia"). Not surprisingly, Trampin' is a largely political album, but it is far from a didactic one. Smith's voice of resistance is a human one, not an ideological one. She and her band cut much of the record live from the floor, and with the exception of the field recorded sounds of children playing in the street in "Radio Baghdad" and immediate and guttural strings added to "My Blakean Year," it comes off as both an immediate and organic record. Smith celebrates what is unique and beautiful in this America while castigating those who would abolish it in favor of homogeneity and submission. Whether it is the razored, riff-driven rock of "Stride of the Mind," the tough, anthemic pounce of "Jubilee," or the haunting midtempo countrified tunes like "Mother Rose," "Trespasses," or "Cash," the sober-eyed critical examination, the exhortation to find the truth and to celebrate life are everywhere. Likewise, in longer pieces like "Ghandi" and "Radio Baghdad," modes and grooves are locked and loaded. Poetry, both sung and spoken, engages the swirling, wavelike roars of apocalyptic power and chaos her band creates and splits the seams with the authority of her language, which claims no authority but that of the victim -- which is all the authority there is. "My Blakean Year" is an acoustic anthem, the confession of a vision that is given full fruit in the largely acoustic "Peaceable Kingdom." The title track is also the closer. A duet between Smith's daughter Jesse Lee Smith's piano and Patti's voice, it is a folk song written in the gospel tradition. One can hear the ghosts of Woody Guthrie, Cisco Houston, and Mimi Fariña in seams between the keys under Jesse's fingers and the wavering, tender grain in Smith's voice. This is timeless music. It knows no age or subgenre classification; it is American music as it has been spoken the world over; it is rock & roll done as well as it can be by anybody.