The Chicks were indeed on top of the world when they launched their supporting tour for their chart-topping 2002 album, Home. As the tour rolled on, they stepped into some controversy, as lead singer Natalie Maines claimed during the buildup to the 2003 Iraq War that the trio was ashamed to be from the same state as President George W. Bush, leading to a prolonged talk radio-fueled media firestorm that hurt their image within country, even as it didn't diminish their sales. Still, it was hard for them to avoid the spotlight, and Maines even seemed to court it as she baited arch nemesis Toby Keith during the Country Music Awards, and it's to their credit that during this hectic year they produced music as good as that captured on the double-disc live souvenir Top of the World Tour: Live. Spanning no less than 22 songs recorded on a variety of dates during the 2003 world tour, the album captures a good cross section of hits and highlights from their Columbia albums, which is also a good representation of their set list for the 2003 tour. While there are no surprises either in song selection or in musical approach (unless a cover of Bob Dylan's "Mississippi" or an appearance from Emmylou Harris counts), and while the performances aren't all that different than the studio sets, it's nevertheless a solid, enjoyable listen that contains all of the Chicks' big songs, thereby revealing both the breadth and depth of their repertoire. And, as an added bonus, there's a nice visual allusion to the turmoil of the previous year in the liner notes -- a nice picture of the trio posed defiantly in front of Freedom Hall. It's a nice added touch to an already winning set. 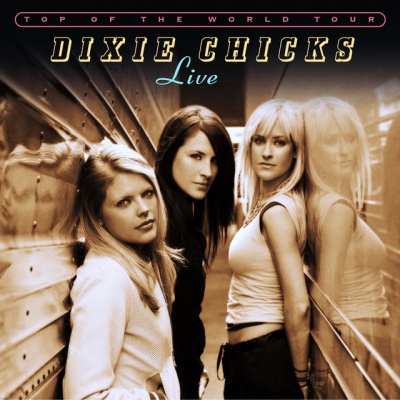