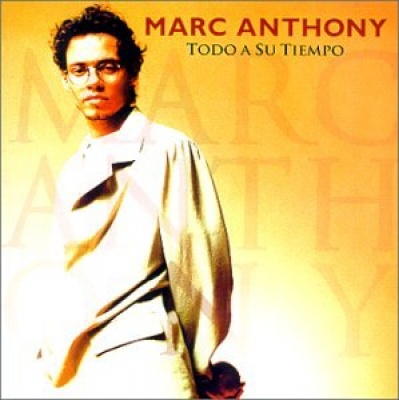 Though Marc Anthony was by many standards an established presence in the field before the 1995 release of Todo a Su Tiempo, it was this record that announced his reign as the crown prince of salsa. Previous projects had shown promise and abundant talent, but never before the level of polish, taste, and confidence present here. His second album with producer Sergio George was certainly a step forward from their 1993 release of Otra Nota. Two years seem to have cleansed this creative duo of its desire for the emotive pop schmaltz that plagued its previous record. Free from these self-destructive longings, George and Anthony set to crafting a crystalline, shimmering, and yet warm contemporary salsa sound that would set the bar for the decade. With musicians like bass player Ruben Rodriguez, percussionists Bobby Allende, Marc Quiñones, and Luis Quintero, trumpet player and arranger Angel Fernandez, and several other modern masters, this is one for the books, vocal performance notwithstanding. Anthony's voice is soaring and luminescent, as salsa lovers have now come to expect of him. With an enviable range and perhaps the finest improvisational abilities on the scene today, Marc Anthony has earned his reputation. Todo a Su Tiempo is without question one of the finest salsa records of the '90s.