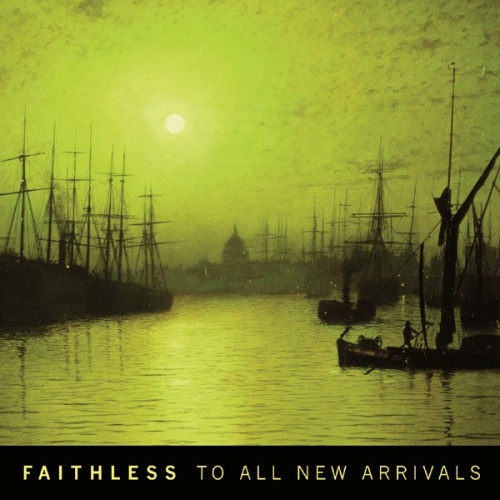 Following their number one greatest-hits collection Forever Faithless from the previous year, Faithless released their fifth studio album, To All New Arrivals, at the end of 2006 while the former was still enjoying its extended run on the charts. Chartwise, it was a step backward for the band that had been progressively reaching higher and higher, culminating in the chart-topping album No Roots. The album title referred to the new babies in the families of bandmembers Rollo and Sister Bliss, but could have equally referred to the tracks, most of which feature collaborations including Harry Collier, Robert Smith from the Cure, Cat Power, and former member Dido on the track "Last This Day." The album opens with a phone call that could have been made from the Twin Towers in 2001, a woman's voice saying "If I don't get out of this, I just want you to know that I really really love you." Then the track "Bombs" moves into trance territory, with an antiwar political message and a chorus that declares there is "so much love, so much pain, so much more than I thought could ever contain." Smith is featured on the track "Spiders, Crocodiles & Kryptonite," with a pulsing beat, distressed children sounds, and a sample of his own number "Lullaby" -- there are also harmonies that remind one of Massive Attack's "Unfinished Symphony." It's pleasant to hear Dido back on a Faithless track, but unfortunately the song "Last This Time" does not have a tune, and the title track -- although backed by a pulsing dance beat -- comes across as a little too preachy, informing the listener how many children die in the world per year from malnutrition, malaria, or other preventable causes. There are three instrumentals, the repetitive tinkling "Nate's Tune," the trancelike "I Hope," and the final track, "Emergency," which throws everything including the kitchen sink into a seven-minute soundscape, but ultimately leaves one feeling dissatisfied that Faithless have offered so much more in the past, and could have on this album as well.