Opening with a second-line drum roll, Moe fires into some "Frankenstein" grunge in a song which is indeed "Stranger Than Fiction." Turning up the tempo, the boys seizure through the pizzica-lypso verses of "Spaz Medicine" before smoothing into the Hall & Oates soul vibe of "Nebraska" (which features a scatty solo by guitarist Al Schnier). "Head" is an appropriately cerebral R.E.M. drifter with a twangy down-home chorus, some clangy guitar, and a steady Zappa/Phish guitar jam break. Such are the elements Moe is known for, and on Car Tires they are able to roll in their own vein while obeying the rules of the recording road. "Hi & Lo" is a bouncy ditty reminiscent of the Beatles, strolling down Abbey Road to a closing which bubbles up from the Yellow Submarine. The longest and most jam-a-licious track on the album, "Plane Crash" compacts an entire bandwidth into one song. Opening with classical strings, the song pauses before creeping through an "I Want You" guitar line to a fully-keyed brass crasher. Next, it's off to the local college station for some world rhythms and amateur vocals. The chorus is rootsy-rock with a blue tag line which most alternative stations would bleep. Then static settles in, as the classical station mixes briefly with the rock setting. As Rob Derhak mentions "the network news," the Lesley spins like the radio dial itself as the various sounds meld in ever faster and more layered possibilities. "Letter Home" offers some country relief from the musical mayhem, but the album gets a bit funky with the hard to decipher evolution of "Big World." "Again & Again" dips back into the easy roots feel, which is much the motif on Tin Cans, but breaks it up with a sudden chorus tempo charge. "It" was such a labor of love (or was it hate?) for the band, that they took the album title (but not much else) from it. "Happy Hour Hero" steps on Little Feat to get itself heard, arpeggiating into the closing cinematic vignette "Queen of the Rodeo," a clunky honky-tonker which confesses the band's deepest realities. 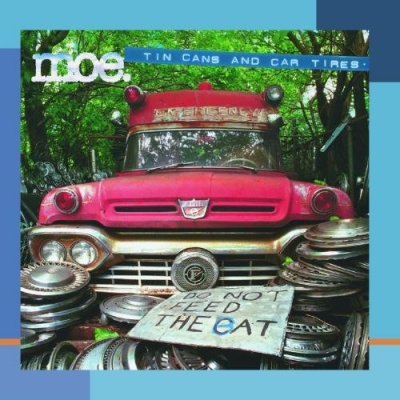